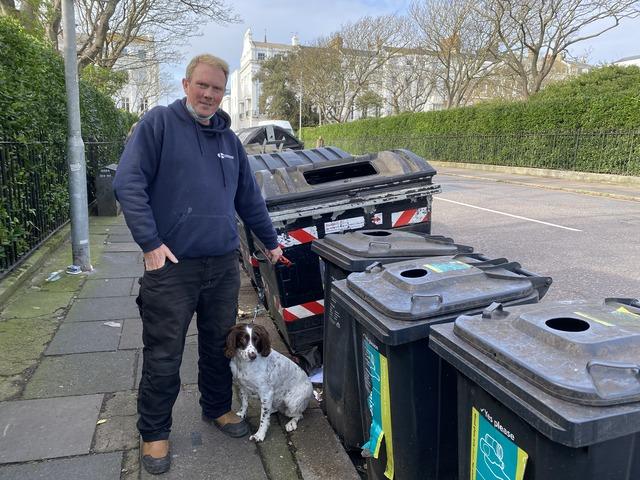 Council litter cops could be wrongly fining domestic cleaners and carers for putting out clients’ rubbish even though the workers were operating within the law, it emerged at a council meeting.

A resident asked Brighton and Hove City Council to explain its policy at the town hall meeting last week.

Mark Walker put his question after one of the council’s “environment enforcement officers” told cleaner Philip Winnan that he would be fined £400 for putting a resident’s rubbish in a communal bin.

Green councillor Amy Heley said: “I can confirm a household cleaner or carer would not be fined for disposing of a resident’s normal household waste in a domestic communal or kerbside bin.

“However, commercial cleaners contracted to remove waste from communal common areas in flats are not lawfully permitted to dispose of waste in domestic bins and would be subject to a fine if they did so.”

Mr Walker asked how dust and dirt produced inside a house, behind the building’s front door, could be classed as commercial waste.

He said: “The Environmental Protection Act states that the two tests are: where did the rubbish come from – part of a residential building – and who created the rubbish?

“When it’s behind a locked door and you can’t access your flat without going up the staircase, then that rubbish by definition is produced by the residents of that building. That is where I believe the council’s position is wrong.”

Mr Walker said that, having researched the Environmental Protection Act, he was concerned that a carer could face a fine for putting a face mask in a communal bin and a cleaner could be penalised for disposing of a cloth.

He said: “There are many questions for Brighton and Hove about whether the policy is proportionate.

“Is it really in the public interest to prosecute a cleaner whose contract requires him or her to hoover the doormat outside the entrance to a flat?

“It’s going to end up in the communal bins anyhow. Why does the council care so much how it gets there? Does this really make Brighton a better place?”

Mr Walker’s initial question on the council’s agenda papers last week said: “For the last 28 years Philip Winnan has been cleaning flats in Lewes Crescent and Sussex Square. He operates with his son through a small limited company called Chartsworth.

“An environmental enforcement officer has told Philip he will be fined £400 for placing household waste in the communal refuse bins.

“This is tragic for Philip’s livelihood and all paid-for carers in the city who look after older residents who will be criminalised for taking out household rubbish. Is this official council policy?”

Mr Winnan, 57, has stopped taking his customers’ rubbish to the bin after he was confronted again by a council litter cop.

He said that he had not received the most recent fine and that the council had invited him to get in touch.

LIKE WHAT WE DO? HELP US TO DO MORE OF IT BY DONATING HERE.

And don't forget to sign up to our email newsletter, bringing you the week's biggest stories every Thursday.