Footloose: The Dance Dance Revolution Craze of the 2000s 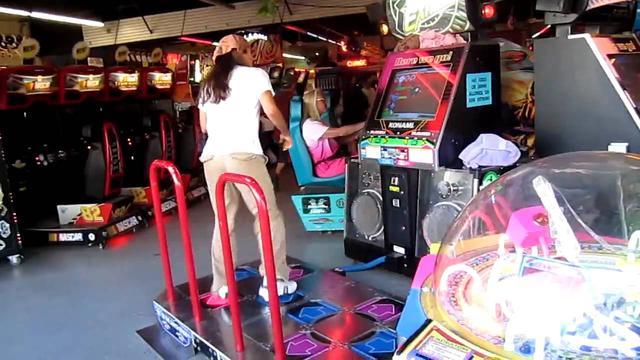 Footloose: The Dance Dance Revolution Craze of the 2000s

The rise of the home gaming consoles in the 1980s and 1990s transformed the video game industry, but one sector was hit with shrapnel: arcades. Thanks to their convenience and ever-increasing computing power, home systems made destination gaming virtually obsolete.

But programmer Yoshihiko Ota came up with a solution—a game that no one could look away from, because no one was quite sure what they were watching. It was Dance Dance Revolution, a highly physical rhythm game that swept Japan before hitting North America, and it was so unique an experience that no living room could hope to replicate it. That’s because the act of embarrassing yourself in front of strangers with flailing limbs and flop sweat to the beat of Chumbawamba's “Tubthumping” could only be achieved out in public.

Unless you know what you’re looking at, the apparatus that makes up a Dance Dance Revolution footprint is peculiar. A raised platform is situated in front of a screen; a support bar is installed in the back. It looks like something intended for physical therapy after a knee replacement.

Ota, a game producer for Konami, knew something that distinctive was needed in order to breathe life into the ailing arcade console market. His team originally began developing a fighting game, but thanks to the Street Fighter II and Mortal Kombat franchises, Ota knew he was reheating gaming’s leftovers.

Instead, he and his development team took note of the clubs they visited in their off-hours, as well as Konami's DJ simulation game, Beatmania. Maybe, Ota thought, the answer was in a dance simulator.

“Simulator” is a bit of a misnomer, though. Unlike other games that have players adopting the identity of a soldier, warrior, or sprinting hedgehog, Dance Dance Revolution tasked users with dancing. Cardinal directions would appear onscreen, which players would have to repeat on the gaming platform. The faster and more accurate a player was, the higher their score would be.

Games that burned calories weren’t a new idea. Nintendo had released its Power Pad in 1988, which enticed gamers to run and jump in track and field events at home. But Dance Dance Revolution was more of an emotional tug. With its pounding, disco-danced beats, players were immersed in both a game and a mood.

Konami rolled out Dance Dance Revolution in Japan in November 1998. For the equivalent of $1.75, kids and stressed-out adults could hop on the platform and work themselves into a frenzy. Some would bounce for hours, sweating profusely and negating the idea that gaming was a sedentary activity. Or a solitary one.

While DDR, as it came to be known, struck a chord in part because Japan was a dance-obsessed culture at the time—kids were practicing hip-hop moves while their parents went to ballrooms—it also resonated because it was a form of exhibitionism. The longer people played, the more frayed they became, as they attempted to echo the game's dance instructions. Crowds gathered to see players give it their all before draping themselves in exhaustion across the support bar, as KC and the Sunshine Band's “That’s the Way (I Like It)” or Carl Douglas's “Kung Fu Fighting” throbbed through bass-heavy speakers.

Best of all, there was no barrier for entry. If you could move, you could play. Konami sold 1000 of the machines, a stellar number for arcade equipment of the era.

DDR was exported to America in 1999, and it followed a similar trajectory as the karaoke craze that had preceded it. There was something charming about watching amateurs have a go at performing, and Dance Dance Revolution acted as its own advertising. Plopped down in arcades, malls, or a Dave & Buster’s, it was impossible to ignore the giant flashing machine with fevered participants gyrating on top of it.

“You look at DDR, and you’re like, ‘What the hell kind of game is this?’” DDR fan Cynan de Leon told The Ringer in 2018. “It’s this ginormous cabinet, it’s got lights, it’s got music, people are stomping on it, some people are acting crazy on it, some people actually try to dance. The music and the lights and everything about it—there was nothing like it in the arcades. You’re just like, ‘I gotta try it, or at least I gotta laugh at these people making themselves look silly on this machine.’”

Any sense of shame was quickly eclipsed by a need for competition. As DDR spread, first in California and then across the country in the early 2000s, unofficial competition dance teams formed. More experienced players began styling their moves with knee plants, flips, and hand plants. In 2000, DDR enthusiast Shirene Olsen told the Los Angeles Times that she would spend up to three hours a day playing and perfecting moves, which sometimes had a regional flair.

“In California we’re more about style,” Olsen said. “In Chicago it’s more about accuracy. The ones who are really, really good are from Chicago.”

In Step Battle mode, players could record their moves for an opponent to try and emulate; in Trick Double, steps doubled from four to eight. At its most advanced, DDR had players looking like someone was fast-forwarding them. One player told the Times he lost 50 pounds playing.

That latter benefit was something school districts took note of. In the mid-2000s, hundreds of them began installing home versions of DDR in school gyms in an effort to make physical education more exciting. That DDR had the flexibility to go into schools and homes was good business for Konami—it eventually released versions for the Sony PlayStation and Xbox—but took some attention away from the more elaborate arcade version. Somehow, screwing up a dance sequence in front of your dog just wasn’t the same.

Although the game received infrequent updates over the years, it’s been primarily the fanbase—not Konami—that’s kept the DDR flame going. Tournaments are organized by players in different regions around the country, even buying their own game stations. It’s a grassroots effort to make DDR part of the overall eSports gaming circuit.

Will that happen? Who knows. But one thing is for sure: DDR, which is equal parts gaming and performance art, has to be the most spectator-friendly gaming competition around.