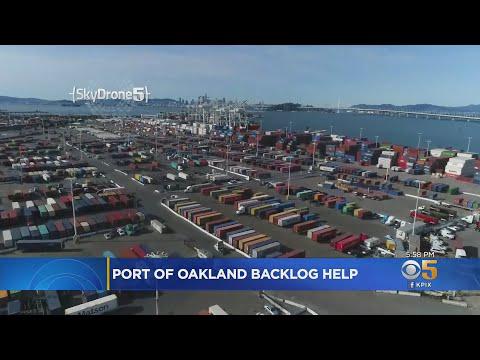 OAKLAND (KPIX 5) – The backlog at the port of Oakland is about to get some help and some house cleaning with a plan to get empty containers filled with California exports.

“Basically, the idea is to get have all these empty containers in a place, where they are staged,” Marilyn Sandifur with the Port of Oakland told KPIX 5. “So they are readily accessible to those who need them to load them up for export.”

The backups at the port haven’t just delayed things Americans want from Asia. It has cost California farmers an estimated $2 billion as the tangled logjam of shipping containers has helped to cut exports out of California.

To help ease the backup, the Department of Transportation and the Department of Agriculture are teaming up for a 25-acre site at Howard Terminal that will do nothing but stage empty containers, specifically for farmers looking to get their goods out of the country.

“So by having reefers, or refrigerated containers, readily accessible, that’s going to make it more efficient,” Sandifur explained.

READ MORE: Black Composers in the Spotlight at San Francisco Conservatory of Music

“Effectively, a way to make sure more of these empty containers get filled with U.S. agricultural exports, instead of being sent right back to China with nothing in them at all,” Secretary of Transportation Pete Buttigieg told KPIX 5.

Buttigieg said the pop-up trailer yard is an idea getting tested around the country as a short-term solution to our supply chain woes. Long-term answers, he says, will take years of infrastructure investment, and even larger changes.

“There is an even deeper economic issue I think we need to talk about here, which is how much we depend on goods that are sourced from abroad,” Buttigieg said. “We are all for international relationships, but the more that we make on American soil, with American workers, the less we have to worry about some of these ups and downs in the shipping routes.”

There is no specific timetable yet for the pop-up shipping site. Port officials said it will open in March, and last for at least several months.