How the pandemic made hotel housekeeping more difficult — and disgusting 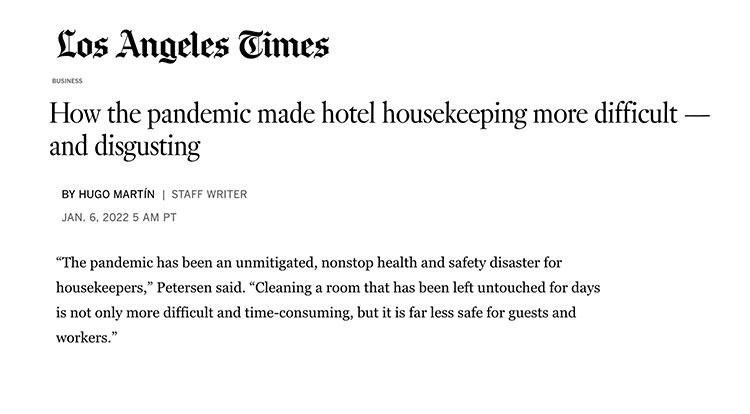 How the pandemic made hotel housekeeping more difficult — and disgusting

Cristina Velasquez has cleaned up almost every imaginable mess during her 21 years as a hotel housekeeper, but the scene awaiting her when she opened the door to a room at the Hilton Garden Inn in Hollywood a few months ago still haunts her.

As she stepped in, she was hit with what smelled like dead animals and the sight of blood on the bedsheets. Lots of blood. Also, maggots and hypodermic needles. Velasquez reported it to her manager, who merely told her to clean it up as fast as possible. She was on a tight schedule. There was no time to investigate.

“It was gross,” Velasquez said in Spanish. “I lost my appetite that day.”

The pandemic has added stress to most jobs, but the work of hotel housekeepers — already an occupation with high injury rates — has become increasingly difficult, with fewer workers facing short deadlines to clean rooms that are more cluttered and filthy than ever.

To reduce the risk of spreading the coronavirus, many of the nation’s largest hotel chains have adopted policies that make daily housekeeping optional, letting guests choose how often housekeepers enter the rooms. In most cases, that means housekeepers enter only after guests check out, leaving multiple days’ worth of trash, grime and discarded towels to deal with.

Although demand for hotel rooms has returned to pre-pandemic levels in Southern California and other parts of the country, hotels have not replenished the housekeeping staff to the levels of 2019.

In Southern California, about 70% of the housekeepers have been rehired since hotels were shut down and thousands of workers were furloughed at the onset of the pandemic, according to Unite Here, Local 11, a union that represents hospitality workers in Southern California and Arizona.

Unruly passengers continue to be a problem, according to a survey of flight attendants.

The messes housekeepers are reporting include mounds of fast-food wrappers, piles of dirty towels,containers of half-eaten takeout food, floors sticky with spilled drinks and, occasionally, feces smeared on bathroom walls. One housekeeper shared a photo with The Times of a bed covered in hundreds of nitrous oxide capsules, manufactured for whip cream dispensers but often used by people who inhale the gas to get a quick dizzying high.

Before the pandemic, housekeepers entered rooms on a daily basis, making it quicker and easier to clean and disinfect each day’s accumulation of clutter and grime, said Kurt Petersen, co-president of the union that represents more than 32,000 hospitality and airport workers. Under the new policies, fewer housekeepers are now required to perform roughly the same number of daily cleanings on the same short deadlines as before the pandemic, but increased messiness makes those jobs more labor-intensive, he said.

“The pandemic has been an unmitigated, nonstop health and safety disaster for housekeepers,” Petersen said. “Cleaning a room that has been left untouched for days is not only more difficult and time-consuming, but it is far less safe for guests and workers.”

The new conditions are likely to increase the already high injury rates among hotel housekeepers, he said.

Academic studies and government labor statistics show that hotel housekeepers suffer one of the highest injury rates among service-industry workers. Many of the injuries come from lifting mattresses to make up beds and moving furniture to dust.

“Changes in hotel room cleaning practices that result in increased workload — for example, understaffing, less-frequent room cleaning resulting in extra dirty rooms — are likely to result in greater risks for work-related injuries for hotel room cleaners,” said Pamela Vossenas, a researcher who co-wrote a 2010 study that found hotel housekeepers had the highest rate of injury overall and the highest rate of musculoskeletal injuries among hotel workers studied.

At the end of every shift, Velasquez, 48, said she goes home with an aching back from moving mattresses and furniture and sore knees from kneeling to clean bathroom floors and shower stalls.

If guests knew how hard her job is, she said, they wouldn’t leave such a mess.

A spokesperson for Hilton Hotel & Resorts said the company offers guests the “choice and control over the level of housekeeping services they desire” because guests may have “varying levels of comfort with someone entering their rooms after they have checked in.”

Hotel industry representatives say the new housekeeping policies are meant to keep workers and guests safe and are preferred by guests.

A survey conducted for the American Hotel and Lodging Assn. found that 81% of hotel guests feel safer staying in a hotel if daily housekeeping is suspended. 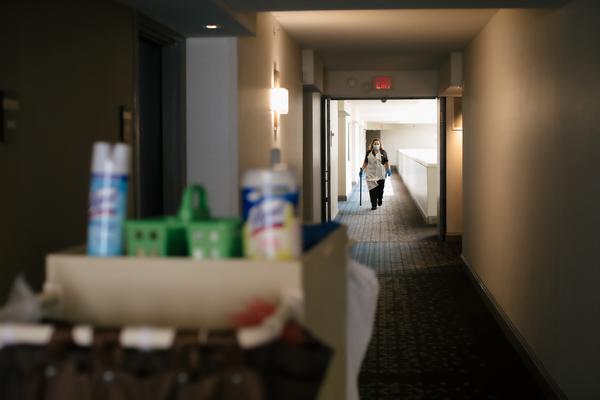 Tourists are back: L.A. hotel bookings reach 100% of their pre-pandemic levels

L.A. hotel bookings in October and November are back to 2019 levels, well above the national average.

“When it comes to room cleaning, hotels are following both guest preferences and the most recent CDC guidance for hotel employees,” the lodging association said in a statement, citing the Centers for Disease Control and Prevention recommendation that “guestrooms occupied by the same customer over multiple days should not be cleaned daily, unless requested.”

The World Health Organization disagrees with the CDC recommendations, saying, “All programs where guests can voluntarily forego housekeeping services should be suspended in the service of maximizing health and safety of hotel staff and guests alike.” The WHO policy suggests that guests and staff will be less at risk of infection if the rooms are regularly cleaned and disinfected by workers wearing gloves, masks and other personal protective equipment.

During a recent eight-hour work shift, Velasquez kept notes and took photos of her workload.

Her manager required her to clean 14 rooms that day. That includes changing the bedding, cleaning and disinfecting the bathroom, dusting, replacing soiled towels, vacuuming the carpeting and mopping the tile and hardwood floors. With a 30-minute break for lunch, that would give her only 32 minutes per room.

She began her shift at 8:32 a.m. It took her 45 minutes to clean the first room. Piles of soiled towels littered the bathroom and trash was strewn throughout the room, outside of the trash bins. She was already behind schedule.

The second room was much cleaner — no trash or towels on the floor — and she was able to complete it in 30 minutes. But by 10 a.m. she had cleaned only two rooms.

It took her an hour to clean the fourth room. The most physically demanding part of the job was lifting the mattresses to replace the bedsheets and to vacuum under the bed, she said. Most days, she works alone.

Covering the issues, politics, culture and lifestyle of the Latino community in L.A., California and beyond.

By the time of her lunch break, she had cleaned only five of the 14 rooms she was assigned to complete. She was frustrated and tired. Velasquez said she has told her manager repeatedly that the rooms are too cluttered and dirty for her to meet the daily quota. Keep to the schedule, she is told.

“I go from room to room and it’s the same,” she said of the workload.

Toward the end of her shift, she stepped into the bathroom of her 12th room and discovered that a guest had smeared feces on the walls of the shower stall.

“I don’t know what kind of people are staying here,” she said. “Why do they do this? Maybe they feel they have the right to do this.”

It took her more than an hour to clean the room, using bleach to get the smell out of the bathroom.

Several of her co-workers had to come to her aid so she could finish all 14 rooms by the end of her shift at 5:30 p.m.

Usually exhausted by the time she gets home, Velasquez tries to spend time with her husband and two sons, ages 20 and 18, at the end of the day. She doesn’t want them to feel abandoned.

She is not sure how much longer she can keep up the pace, but she knows she can’t quit. She needs to work to support her family.

“I get worried because I know I need the work,” Velasquez said. “But the harder I work, the more work they have for me.”