Tested: What is the best fan for indoor training? - CyclingTips 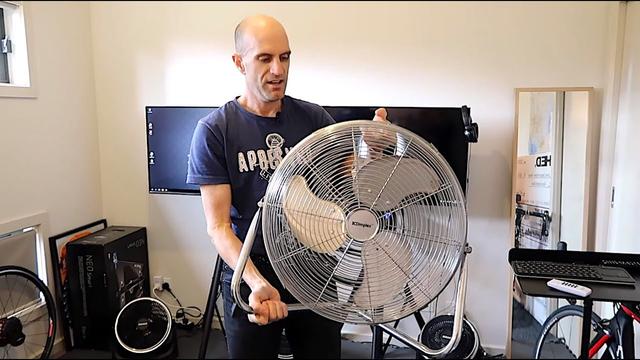 Tested: What is the best fan for indoor training? - CyclingTips

Indoor training has changed radically over the past decade. It’s not so long ago a blank wall was the most common form of trainer entertainment. Repeats of old races were about as interactive as indoor riding got. Nowadays we can enjoy smart trainers, virtual worlds, and even artificially intelligent training plans.

One thing that hasn’t changed is the sweating. Indoor training gets hot, quickly! Not only is the sweaty mess quite nasty, but the increased body temperature can be detrimental to training and even downright dangerous. So important is keeping cool that I put fans as the number one essential accessory in my perfect pain cave series. Most riders will agree that a good fan is an absolute must, but with so many different shapes, sizes, types, and prices, it can be difficult to determine which fan is right for you. We decided to put some fans to the test to find the best one for indoor training.

Unlike many cycling components and accessories, fans are a popular product in high demand across different markets. The list of fan offerings to meet the demands of indoor training is almost endless. Search “floor fan”, “desk fan”, or “table fan” online, and you could be scrolling through the results for a week. As such, it would be impossible to review and rate every fan on the market. Instead, I decided to take four different fans with various designs and price points to recommend the best fan type for indoor training.

What makes a good fan?

When we exercise, we accumulate heat within our body. The body has a natural ability to dissipate this heat through conduction, convection, radiation, and evaporation through sweating. Outdoors, the cooling effect of air moving over the body compliments this natural ability. Indoors we lack that natural cooling airflow, and that’s where problems arise.

As many of us have experienced, the body’s ability to dissipate heat is limited. Whether it be a hard climb on a stiflingly hot day outdoors or a hard indoor session, the heat build-up eventually becomes too much for the body to dissipate. With specific protocols and managed correctly, this increased heat and core body temperature in training can result in performance gains on race day. More often, though, and especially when mismanaged, this heat build-up is detrimental to training at best and even quite dangerous, causing severe heat exhaustion, among other harmful side effects.

When training indoors, we want, as much as possible, to replicate the same cooling airflow we get over the body when riding outdoors. Training in a well-ventilated area with a lower room temperature is key in creating conditions in which the body can perform adequately. In combination with the right fan, these ambient conditions can make a world of difference to your indoor training comfort and effectiveness.

As already mentioned, the sheer number of fans on offer makes it impossible to test them all. We decided to narrow our focus to several fan types and selected a fan to represent each in our testing. First, I selected a generic 9″ desk fan, commonly seen in indoor setups around the world. Next up, I wanted to determine in testing if a large enough circulator fan could double up as a fan for Zwifting. For this reason, I included a large circulator fan from Black & Decker.

The Black & Decker fan’s intended use is for air circulation purposes. As such, it is not designed to generate high wind speeds. I wanted to test if its sheer size still makes it useful for indoor training.

I opted for exercise-specific options to fill the final two spots in the test. Firstly, the Vacmaster Cardio 54 which promises high wind speed and CFM (cubic feet per minute) ratings with an added bonus remote control. Last but not least I simply had to include the Wahoo Headwind given its status as probably the best-known fan in the indoor cycling space.