Warframe Update 1.015 Released for Echoes of War This February 9 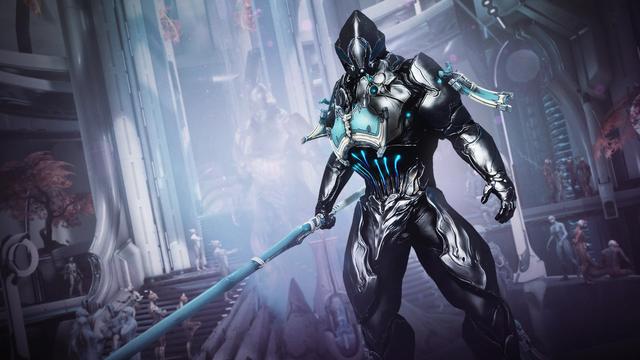 Warframe Update 1.015 Released for Echoes of War This February 9

Digital Extremes has released the Warframe update 1.015 for both last-gen and next-gen platforms! This patch is for the Echoes of War title update, which is the first mainline update of the year! Read on for the full Warframe Echoes of War patch notes, which the devs call the 31.1.0 title update.

The year is 2022, and Digital Extremes is back with the first Mainline of the year.

Less than 2 months ago The New War Quest was launched on all platforms. Our ambitions to have Replay on launch didn’t make it in time, but we made it our top priority to have it ready for our first Update of 2022. There’s still no accurate words to describe our appreciation for all the support and reactions to The New War, and we hope you enjoy replaying it as many times as you wish!

There’s lots more in the Warframe oven for 2022 – thank you for coming along the ride!

In addition, you may notice nods to the Public Test Cluster in some sections. Thank you to everybody that participated in our weekend test! We’ve made some changes in response that you’ll find throughout the patch notes.*

*The following changes/fixes from the PC update will be coming in a future update since they were code and missed our Cert deadline:

THE NEW WAR IS NOW REPLAYABLE!

Experience The New War Quest once more, Tenno! Access The New War Quest in the Codex to Replay. Please note with this implementation the Replay is a full time commitment and you will be locked into the Quest as you were in the first run, so plan accordingly.

SPOILER POLICY This quest has significant Spoilers for Warframe and its future. While The New War has been out since December 15th, there are still Tenno out there who have yet to experience it for the first time. Please let all Tenno experience it at their own pace, and be kind. Use liberal spoiler tags if you wish to talk about it, and do not ruin the experience for someone else. Content Creators should clearly label spoiler content and use spoiler-free thumbnails.

The Quest can be discussed in our temporary Sub Forum: https://forums.warframe.com/forum/1782-the-new-war/

During the “end choice” moment, you’ll be able to select the other choices for strictly experience purposes. The choice you made in your original playthrough will override it each time once complete.

Included in this first batch of designs from Round 21, you’ll find exciting Skins and Customizations for your Warframes, Weapons, and more! Check them out now in the in-game Market and support hard-working Tenno designers from the Warframe Community.

TENNOGEN ROUND 21: PART 2 will follow shortly! Check out which Skins will be coming here. 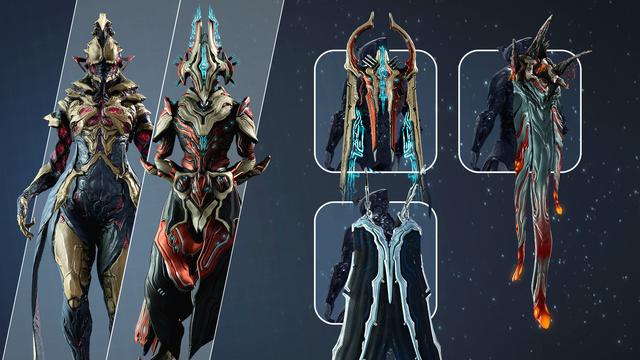 Descend from on high as the legend that Hildryn truly is. A skin that ensures her legend will echo down the ages. Strength and glory!

Hildryn arises anew, re-forged in the fires of finest smith-craft. Add splendor to her saga with this collection of deluxe items.The Einheri skin includes a new look for Hildryn’s Balefire Charger. The Deluxe Bundle includes the Hildryn Einheri Skin, Blodgard Heavy Blade Skin and the Brising Syandana. BLODGARD HEAVY BLADE SKIN A master-crafted weapon, forged in fire for the hands of heroes – yet worthy of a goddess. Bestow this skin upon any Axe.

BRISING SYANDANA The sun rises on the victor and sets upon the vanquished. This is how your legend is made. Adorn yourself with this exquisite syandana, worthy of the sun herself.

*Acquire from the Cephalon Suda and Steel Meridian Syndicate Offerings.

*Acquire from the Arbiters of Hexis and Perrin Sequence Syndicate Offerings.

Grendel: Gourmand: Feast Instead of Energy, consumes 200 Health on cast and 30 Health Drain.

*Acquire from the Red Veil and Steel Meridian Syndicate Offerings.

Yareli: Surging Blades: Aquablades Cast the ability to hurl a single Aquablade, which gains 10% damage per enemy hit by your Aquablades. No cost to throw while riding Merulina.

As the pool of Adversary weapons grows and your checklist fills out, the natural chance of finding a Progenitor (Larvling or Candidate) with the exact weapon you desire shrinks. This Adversary Weapon Generation Quality of Life change is meant to reduce randomness over time of what weapon a Progenitor Candidate (Sister) or Larvling (Kuva Lich) can spawn with.

How it works: By skipping a Progenitor (choosing not to Mercy them) the spawned weapon is then put into a ‘reject’ pile for that round of Adversary generation, meaning that it will not appear again and ultimately reducing the weapon pool each time you ‘reject’.

The list of rejected weapons is cleared once you accept an Adversary and the process would start again from a clean slate for both Sister or Kuva Lich the next time you go looking for an Adversary. This list clearing applies to both Sister and Kuva Lich, meaning once the chosen Adversary is Converted or Vanquished, the list clears for both factions. SEASONAL EVENTS

It’s Star Days, Stardust! Love is in the air, Ticker has made sure of that. Visit her in Fortuna at her special festive booth to claim Rewards by exchanging Debt-Bonds from 2pm ET today until February 23, 2022 @ 2pm.

The majestic Eros Ephemera has returned, along with the Neon Eros Wings decoration and Eros Arrow Skin, and don’t miss out on three brand-new seasonal Glyphs; Star Days Ordis, Yareli, and Grineer Glyph.

Plus, find a home in your Orbiter for the ultra-special Ticker Floof – which can now be interacted with when placed to hear Ticker speak some words of wisdom!

If you already own the Ticker Floof from last year’s Star Days, the interactive component has been retroactively added to them as well!

The following have also been added to the in-game Market for the season of love – find them in the ‘featured’ section:

Tennobaum items can be acquired from Ticker’s Star Days Offerings!

Our TennoBaum celebrations look a little different this year! Due to factors including The New War’s December launch, we have opted to merge this year’s TennoBaum & Star Days together in the month of February.

Festive accessories from TennoBaum 2020 will return as part of Ticker’s Star Days offerings, and the TennoBaum tradition of donating will continue with a donation to a charity (to be announced on February 9) on behalf of the Warframe community. While no in-game gifting event and online tracker will occur this year, we’ll also be taking the spirit of gift-giving into a special TennoBaum x Star Days livestream on February 10th, which will be our Prime Time gifting spectacular!

Dojo Architects are you ready?? We have a handful of new Dojo Decorations and some new Rooms as well! We cannot wait to see your continually amazing creations.

REFLECTION PROBE CHANGES: We rebuilt reflections across the entire game when Enhanced Graphics Engine is enabled to use modern high quality texture format which improves the quality and punch of gold, bronze, chrome, and other metallics. This change reduces the noise, makes them more vibrant, and ultimately more balanced overall. A lot to visually enjoy during your replay of The New War!

ORB VALLIS CONSERVATION CHANGE: In addition to the already existing Conservation method of Trail & Tranq, all species of animal on Orb Vallis can now be found ambiently in the wild! (Bolarola, Sawgaw, Kubrodon, Horrasque, Stover, Pobber, Vermink). Due to the endangered nature of the species, the rarest subspecies will still need to be tracked down by following their trails. GENERAL CHANGES:

NEW WAR REPLAY FIXES Thanks to everyone who participated in our Public Test Weekend for New War replay functionality (and possibly first-time Quest runs)! Over 200 testers shared their reports spanning the entire New War quest. We’ve done our best to focus on the larger issues, and those that affected replay functionality, in time for this mainline release. We have you to thank for the following issues being resolved:

We still have a number of reports that are being investigated, so expect more improvements to trickle in during future Hotfixes if they are not code! The New War Changes & Fixes:

Once we get news of the event or expanison, we’ll let our readers know.