Why Do Olympic Skiers Wear Tape on Their Faces? | Mental Floss 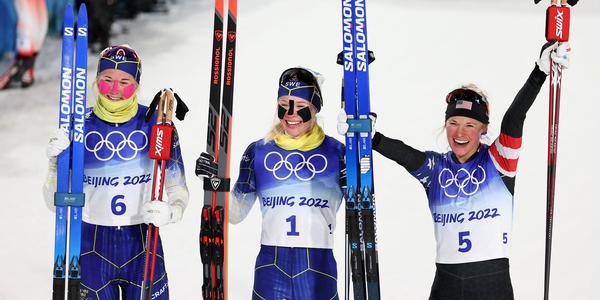 Why Do Olympic Skiers Wear Tape on Their Faces? | Mental Floss

Spend enough time watching Beijing’s Winter Olympics and you’ll no doubt notice that a number of skiers and other athletes have covered parts of their faces with patches of tape.

It’s kinesiology tape, an extra-stretchy cloth adhesive whose acrylic backing is supposed to be sticky enough to gently pull your skin away from the muscles below it. Athletes of many sports, from volleyball to tennis, use it to alleviate pain and soreness, and the U.S. Olympic and Paralympic Committee has been licensing the brand KT Tape since the 2016 Summer Olympics in Rio de Janeiro.

But the cold-weather competitors in Beijing aren’t slapping strips of KT Tape across their cheeks and noses to keep those muscles from aching: They’re doing it to keep warm. What Beijing currently lacks in real snow, it makes up for in single-digit temperatures and even frostier wind chills. “It’s one of the coldest places I’ve ever been on Earth,” U.S. skier Aaron Blunck told the Los Angeles Times. “It makes your body get stiff.”

A Team USA spokesperson told Bustle that the KT Tape “creates a bit of a shield” between exposed skin and the frigid air. It seems plausible that even a thin layer of tape would insulate heat better than nothing, but at this point, the evidence is solely anecdotal. And because KT Tape hasn’t been clinically tested on faces, the company doesn’t officially endorse that particular usage—though KT Tape CEO and president Greg Venner told TODAY that they “applaud the creativity.” The adhesive is also strong enough to stay on for several days, so peeling it off sensitive facial skin may be uncomfortable.

“We’ve seen KT Tape used as protection against the wind in winter sports over the years, so although it isn’t a clinically approved usage, we appreciate the ingenuity,” Venner said.