Bold paint, plus even bolder wallpaper, transforms a humdrum house in Cambridge 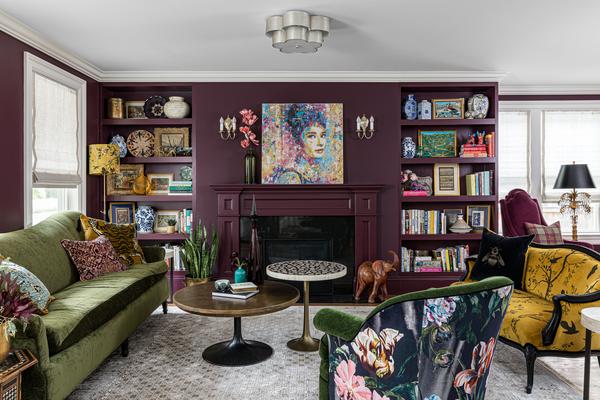 Bold paint, plus even bolder wallpaper, transforms a humdrum house in Cambridge

Assessing the long, open living space, Casagrande advised that they create a welcoming seating arrangement centered around the fireplace, with a reading nook and a game table nearby. They anchored the scheme with an olive green sofa that James spotted online at Arhaus. “The price was right and the color looks great with [Erin’s] red hair,” Casagrande says.

From there, Casagrande brought in vintage pieces. First were the swivel chairs from Boomerangs in Jamaica Plain that she reupholstered with lush green mohair and Designers Guild floral velvet. The luxe botanical pattern of the velvet, reminiscent of Dutch still life paintings, nods to Snoek’s Dutch heritage. “It’s an expensive fabric, but we only needed it on the back side, since that’s what you see when you enter the house,” Casagrande says.

Next came a pair of chairs with a grandiose silhouette that Casagrande scooped up at an estate sale and re-covered in burgundy velvet. The original upholstery was so terrible, she says, that she didn’t even show the chairs to James for fear of scaring her. But James had faith. “Just surprise me,” she told the designer. The chairs, which sit in front of a trio of windows beside built-ins, are the perfect perch for browsing James’ collection of international cookbooks. They also inspired the aubergine walls. 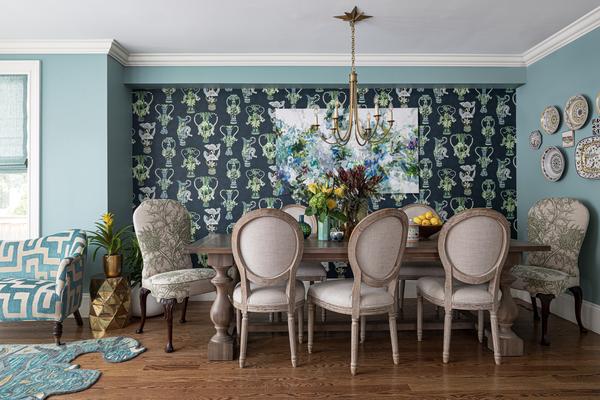 Color and pattern make their way into the eat-in-kitchen, where Casagrande created an accent wall with a Cole & Son wallpaper picturing classical urns festooned with animals from Africa. “Erin and her husband have traveled the world,” Casagrande says. “I wanted their home to represent their love of all cultures.”

The wall is a lively backdrop for the sedate RH dining table and chairs and simple brass chandelier. Unable to resist the inclination to layer, however, Casagrande also hung a canvas from Jules Place with an abstract explosion of blooms. Newly upholstered vintage chairs subtly dress up each end of the table, and a settee covered in a large-scale geometric print is positioned next to the back door. “The patterns work together because they’re a mix of organic and graphic in the same color palette,” Casagrande explains.

Wallpaper and vintage chairs make their way upstairs, too. Snoek so admired the rosy-hued toile wallpaper in James’ office that he asked Casagrande for wallpaper in his own. She covered one wall with a quirky Cole & Son paper featuring flying machines — a play on his career as a computer scientist in the machine learning field. She also painted his old, beat-up desk blue, and re-covered a chair procured on Facebook Marketplace in a strie velvet.

James proclaims the primary bedroom even cozier than the living room. Casagrande painted it a deep green that James says looks velvety at night. Since the couple was upgrading to a king bed — in response to James’ pregnancy and their two bed-hog dogs — Casagrande designed an upholstered bed in a striped fabric by Kit Kemp, whose New York City hotel she had recently visited.

When it came time to design the nursery, James called Casagrande back. They chose a fun but somewhat serious dinosaur toile wallpaper by House of Hackney, confident it will stand the test of time. Snoek was so enamored with the look that he previewed the room for his colleagues via Zoom. Around the same time, James, in celebration of earning her doctorate, splurged on wallpapering the stairs with a Timorous Beasties treescape showing owls, squirrels, and such. “I notice new details all the time,” James says of the design.

Casagrande is still glowing from the experience of working with a client whose taste is totally aligned with her own. “I brought her goodies from every buying trip,” the designer says. “She loved them every time.”

Marni Elyse Katz is a regular contributor to the Globe Magazine. Send comments to magazine@globe.com.