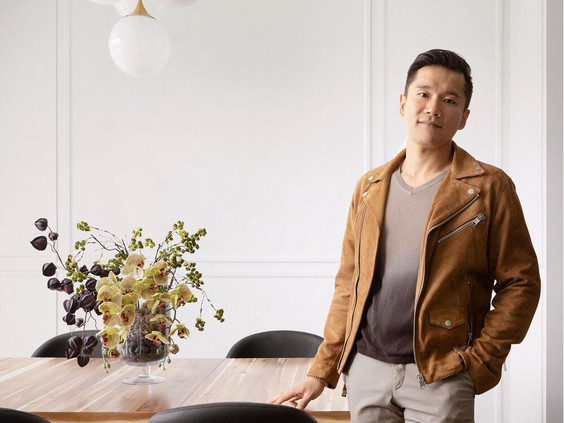 Thank the pandemic for the explosive interest in buying, selling, renovating, decorating and living well at home.

Calgary-based interior designer Louis Duncan-He has an ever-growing roster of projects on the go in response to this new demand. A lake house in Vernon, B.C., and a property in Toronto are just two of the 20 projects he and his team are working on.

Never too busy to share his love of all things design, Duncan-He will be one of the Main Stage presenters at the 2022 Calgary Home and Garden Show, Feb. 24 to 27 at the BMO Centre, Stampede Park.

“My presentation will be split into two pieces. The first part will be like a Design 101,” says the 38-year-old Vancouver-born designer, who discovered his true creative calling while working in corporate advertising.

“I think there’s a lot of mystery about working with a designer and people have a lot of questions. I’d like to provide some point form tips that people can take away and immediately get something out of it,” he says.

The second part will address his advertised topic, Designing with Soul, which Duncan-He says is about designing spaces with a person’s essence rather than mindlessly putting things together to look a certain way.

“I want someone to see the space and I want them to feel something. I want it to cause a reaction,” he says.

His work has been internationally featured in home design and renovation magazines. The Marda Loop home he shares with his husband of 10 years, which he completely overhauled, was featured in the January edition of Style at Home.

His work is described as possessing a “West Coast perspective,” not to be confused with “Coastal,” which describes influences from Fiji or even the Hamptons in New York State.

“I grew up in B.C., so I’m very much inspired by that kind of relaxed, effortless sense of elegance and chic-ness. I love exploring the tension between something natural and something that’s very material. So, when I say West Coast, it’s natural with a certain fluidity,” he says.

Calgary was only supposed to be a pit-stop on his husband’s journey to be a physician. The city, which he expected to be full-on Stampede 24/7/365, caught him off guard.

“It has a very unique population. There’s a lot of great cultural things to take in and (compared to Vancouver) it’s a smaller city, with regards to traffic,” he says. “There’s a lot of vibrant, creative energy in Calgary with a lot of national designers.”

More than 250 exhibitors will be on hand at the Calgary Home and Garden Show. Attendees can find more interior design ideas by visiting the builder and renovation experts from Mackay Interior Finishing, Renovations by Hearth and Home and Rusch Design Build.