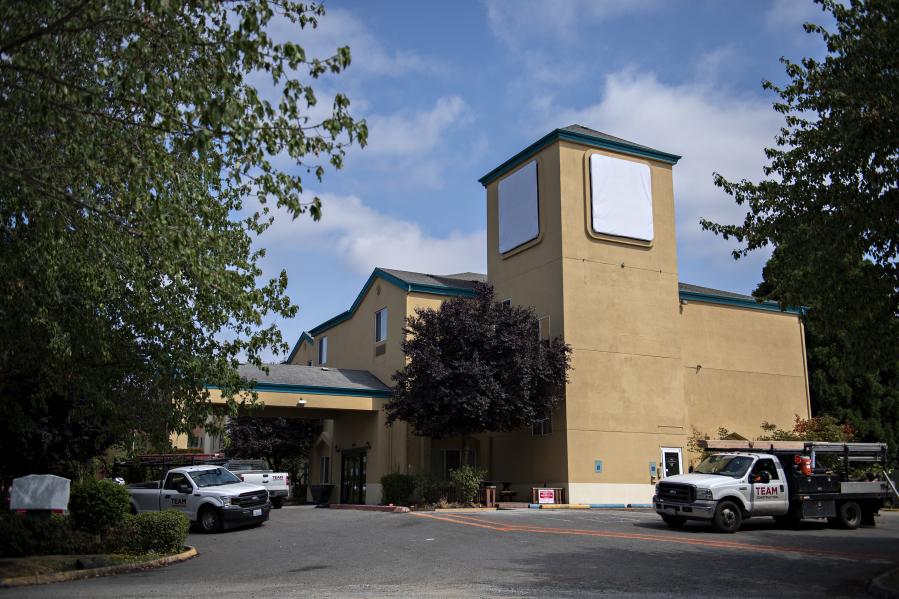 A vacant senior assisted living facility will get a new lease on life as a homeless shelter serving the community.

After an at times heated discussion, members of the Medford planning commission on Monday night on a 5 to 1 vote with abstention approved issuing a conditional use permit for the property located at 509 Lemke Ave. to operate as a homeless shelter. Commission member Tim Hansen was opposed and member Molly Knoll abstained because of a confl ict of interest.

The city had previously approved a conditional use permit for a location on 4th Street in the city for the shelter. However, as Taylor County Supportive Housing board president Jessica Mudgett explained, the estimated cost of renovations to that location was in excess of $500,000 with recent estimates from Huotari Construction putting renovation costs for the 4th Street property at about $440,000.

By comparison, the Lemke Ave. property, which operated as Deerview Meadows Assisted Living until the last resident moved out in December 2021, needs very little in the way of remodeling. After the meeting, Mudgett noted they could be open in 30 to 60 days pending the scheduled closing on the property this week and cosmetic changes including painting and replacing the carpets with hard surface flooring to ease long-term maintenance.

Coming into Monday’s meeting, the outcome was far from certain as the city received communication from nearby residents questioning the need for and opposing the proposed location for the shelter.

“We purchased a home in Medford in October 2021 in a residential neighborhood. We had no idea that the Deer View Assisted Living Center would be considered as a homeless shelter. If we had known, we would not have purchased the property,” Reed stated in her letter.

“A homeless shelter may be needed in Medford, but not in a residential neighborhood. The Deer View building is right next to an apartment complex, several family homes and the school bus stop. I would not feel comfortable allowing my grandchildren to walk from this bus stop to my house if the shelter is approved. Allowing the use permit as a shelter for this building is not in the best interest of the residents in this neighborhood,” she stated. Her letter to the city went on to state: “Please take into account that the homeless have severe mental illness, chronic substance abuse and victims of domestic violence. The Wisconsin Family Impact Seminar reported that in a Point-in-Time count in January 2016, ‘Of the homeless people counted on a single night in January 2016, 22% had severe mental illness and 15% had chronic substance abuse.’” “On a final note, we ask: As a Medford resident, would you want this homeless shelter in your backyard?” she stated.

Reed restated her concerns during the public hearing and questioned the rules, supervision, and security that would be in place. She also questioned the need for the shelter at all. “Are we solving a problem that doesn’t exist in Medford?” she asked.

Mudgett attempted to address the concerns noting that the facility will have a full-time staff member there. Currently those with housing security issues are provided vouchers for motel rooms in the city for a temporary basis. Mudgett said the short term stays are often not long enough to work with those in need to get them services to lead to long-term solutions.

The intent of the shelter is to provide housing for 30 to 60 days as part of a program to help the individuals get back on their feet, gain or maintain employment, save the money needed for a deposit and rent to get into an apartment and ultimately graduate into permanent housing. She said the reason they were looking at this property was because of how well it met their needs without the massive remodeling expense of the other building.

“It is better than putting it in my backyard,” Reed said of the remodeling cost of the previous location. “I am very disappointed,” she said.

Shattuck Street resident Joshua Kohl and senior pastor of River of Hope Church who serves on the TCSH board, spoke passionately in support of the proposed shelter. “You have a chance in Medford to literally help homeless people, but you want to say ‘not in my backyard.”

“If I could put it in my backyard I would,” Kohl said. He said he does not live far from this location and has no problem with raising his daughters in that area, nor would he have any problem with them being next door to the shelter.

During the meeting portion following the public hearing, Hansen spoke against the location. He noted the apartment building that is nearby and that there are children who live in those apartments. He also suggested that without the requirements that are part of the community development block grant funding the renovation work would be lower. The county board withdrew the state grant funds for the project over concerns that the county could be liable to pay back the entire amount of the grant if the project terms were not met.

Mudgett noted that the previous location was picked as a compromise with the city and county based on the criteria those entities developed. She also noted that the 4th Street location was near the Medford Area Middle School and that having children nearby wasn’t an issue there.

Commission member Peggy Kraschnewski questioned not having 24-hour security and how rules about not allowing alcohol or drugs on the property would be enforced.

Mudgett said the plan is for the full time administra- tor to be on staff at the building and as it gets running and funding is available add part-time staff for weekends and utilize volunteers for evenings. In addition to the rules against alcohol and drugs, the shelter policies would prohibit people who are on sexual assault registries and those who have committed violent crimes. At any time, those in the shelter program can have their rooms searched and be asked to submit to drug testing. If they refuse or are found using they will be removed from the program.

“Are we going to wait until something happens and then react?” Kraschnewski asked, noting that the people could have drug and alcohol problems.

Mudgett said they have specific funding that prevents the shelter from turning away people with drug and alcohol problems at screening. That said, she said they can be tested on day two or three and if they are using be removed from the program.

“If we have any reason to be suspect the test can happen, that is as proactive as we can get,” Kohl said.

Kraschnewski noted that she was concerned about the people living in nearby houses.

“I completely understand your concern,” Kohl said, noting that they have a lot more control over who will be admitted to stay at the shelter than landlords have of who can live in apartments. He said just because people don’t see it, doesn’t mean that they can guarantee they don’t already live next door to a drug user or alcoholic.

“You can’t guarantee that the man living next to you doesn’t beat his wife and kids,” Kohl said.

During discussion city planner Bob Christensen suggested requiring TCSH to turn in their policy manual for the facility as a condition of issuing the permit so that the city could review it. Committee member Dave Zimmerman opposed that idea noting they were told the policy manual was currently being reviewed by the 15-member TCSH board with that group set to approve it at their next meeting.

“We are not here to oversee that policy,” Zimmerman said.

“I agree, they have their own board,” said mayor Mike Wellner.

Following nearly an hour of discussion, commission members voted to grant the conditional use permit with Hansen opposed.

Three rezoning requests were presented for public hearing and action at the planning commission and all three were given the green light without any discussion and very few comments from residents.

While the planning commission can recommend the zoning changes be made, the final action will be done at the city council meeting later this month.

The first two were requests to rezone parcels along Pep’s Drive in the industrial park land south of CTH O. The land is all owned by the city of Medford and the city wants to use the southernmost area for single family homes. The area closer to CTH O will be used for multifamily homes. The whole area is currently zoned for light industrial use.

In addition to the residential rezoning requests, commission members were asked to support a zoning change for 147 Ninth Street and 870 E. Broadway Ave (Hwy 64) for the Marshfield Clinic Health System.

According to the zoning permit, Marshfield Clinic plans to build a 10-licensed bed hospital facility to include an emergency department, inpatient services, small lab and diagnostics (including CT, x-ray, and ultrasound). The facility will be 18,000 square feet and include a boardcertifi ed ED physician and support staff. The emergency department will have eight treatment rooms with the inpatient area having 10 beds. The facility is designed to accommodate patients with airborne isolation needs and precautions.

During the public hearing on the rezoning request, Chris Piotrowski of the Medford Cooperative spoke in support of the hospital project.

In other action, commission members approved the final plat for Edgewood Estate located north of Allman Street. The area is being developed by Chuck and Linda Gelhaus. Planning commission approval will send this to the full city council for final action.

The former Deerview Meadows assisted living facility will become the location for the Taylor House shelter serving area homeless individuals and families with transitional housing under programs to help get them into permanent housing arrangements.BRIAN WILSON/THE STAR NEWS