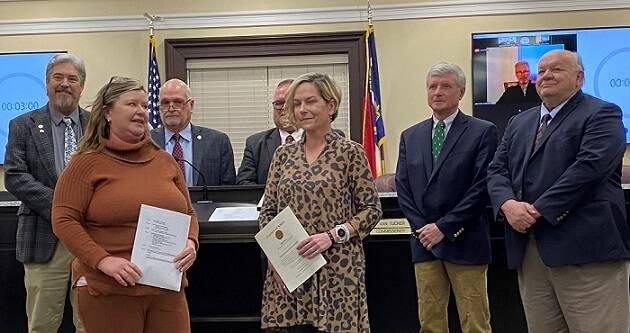 The surplus property at 130 Rawley Avenue, and its parking lot, have a bidder. In late January an opening bid of $200,000 was made. The board approved accepting the opening bid and will now move into a period of upset bidding where higher offers may be made.

In a marathon meeting running nearly four hours total, the Surry County Commissioners this week made another move toward legal action against three property owners with for 14 parcels on which taxes are delinquent.

Surry County Tax Administrator Penny Harrison told the commissioners that her office is bound by state general statute to report to the board the total amount of unpaid taxes that are liens on property and then to make public those numbers. The commissioner approved her request to publish the report in early March.

Harrison reported the county has 14 parcels of land that have delinquent taxes. Due diligence having been done for the county to collect from the three owners, she needed board approval to accept opening bids on foreclosure sales – which she received. Curious parties can follow a link from the tax department’s website to the Kania Law Firm to see more details on the properties.

In an unrelated matter, the board recognized Fire Marshal Doug Jones. The veteran of nearly 40 years of service to the county has retired and was thanked by commissioners and peers alike.

In other business during the meeting:

– Dobson is seeking to buy a new-to-them ladder truck for their fire department, and the West Yadkin Fire Department has the 100-foot truck they are looking for. Their 50-foot ladder truck will not have sufficient reach for the new detention center, community college or the Hampton Inn off I-77.

Commissioner Van Tucker asked if precedent existed for helping the Dobson fire department. County Manager Chris Knopf did not think so but noted that around ten years ago the county stopped giving Dobson an annual allocation meant to offset the number of non-taxable county properties in the town limits.

Commissioner Larry Johnson made note the number of county buildings in the county seat merit consideration of assisting Dobson with the purchase.

No specific ask was made from Dobson, rather a contribution toward the purchase of the ladder truck was sought. This issue will be reconsidered at the board’s upcoming retreat meeting.

– A lesser-known victim of 2021 that has been greatly missed is a member of the public works team, they lost a 2005 Mack Truck to equipment malfunction led to it going down a bank on South Main Street.

Jessica Montgomery from public works said a $70,000 insurance payout will help with replacing the truck, as will a recent windfall from an auction at the landfill netting almost $200,000.

She said the price of the truck keeps going up, so a timely approval is needed to accept the most recent quote. Commissioners gave their approval for public works to roll on with the purchase that will not hit until the next fiscal year.

-In a late addition to the agenda, Assistant to the County Manager Nathan Walls told the board an offer has come in on county surplus properties, two parcels of land on Rawley Avenue that were the former central office and parking lot for Mount Airy City Schools. 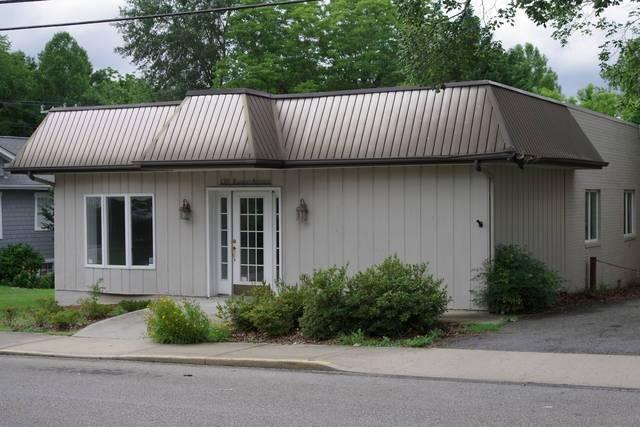 The board has been discussing the building and parking lot for a couple of years, with Commissioner Johnson noting in 2020 that because the building is vacant and not generating tax income, “Right now the value is zero. We own it. We get zero from it.”

The $200,000 bid is below the appraised value of the property of $250,000 and significantly below the tax value, that County Attorney Ed Woltz previously reported was more than$400,000.

Woltz told the board the bid was made by a person holding the lease agreement on the property, signaling the party has real interest. The board approved the opening bid, and the opening of the upset bidding process. With upset bidding should the high bid still be lower than what the county wants, they can reject it.

-Two items had their final vote and approval by the board following two public hearings, and a period of comment. A resolution regarding new cell tower construction and their effect on viewsheds as well as a potential expansion of the Rural Health Center, with partial county match of state grants, both passed the board.

-Assistant County Manager Sandy Snow was on hand to introduce two new key players to the county team. Marty Needham had already presented to the board but was formally introduced as the new Planning Manager.

Byron Isaacs was also introduced as the new Emergency Management Coordinator, moving over from Emergency Medical Services, he said they have “hit the ground running.”

-Charlotte Reeves of the substance abuse recovery office gave special thanks and credit to Paula Sheets for her dedication in service to the All-Star prevention group that meets monthly. They engage in youth education, dissemination of information about the dangers of substance abuse, and community health and wellness.

At every meeting Sheets is there with out of the box thinking and is also an office volunteer who has unique ideas to reach and educate. Of particular interest to Sheets are Good Samaritan laws that encourage bystanders to get involved in emergency situations without fear of legal repercussions for trying to save a life.

The Surry County Board of Commissioners recognized Paula Sheets for her service and for being an “outstanding citizen.”