DIY success! 3 in 10 homeowners have done renovations all by themselves

DIY success! 3 in 10 homeowners have done renovations all by themselves

NEW YORK — Nearly three in four Americans get a headache just thinking about remodeling their homes. A survey of 2,000 homeowners looked at some of the pain points of remodeling and shows that 73 percent have put off home improvements.

What’s keeping homeowners from making upgrades? Among the top reasons: they’re just too costly (65%), too much work (52%), or they don’t know how or where to start (45%). Still, 73 percent get excited at the thought of renovating their homes, and 65 percent are looking forward to renovating their home in the new year.

Pandemic inspired many to consider renovations

Conducted by OnePoll on behalf of FrogTape, the survey finds that 69 percent say being indoors during the pandemic has inspired them to renovate their homes, especially since the same percentage of people had to use or create an at-home workspace. Similarly, two in three think they’d be more productive if they had a nicer workspace at home.

Fantasizing about remodeling can be fun, but 79 percent agree that it’s more work than it seems and a similar number believe it’s also more expensive than it looks (77%). 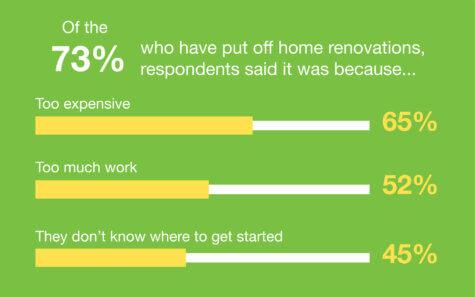 According to the study, the average budget respondents would set aside for remodeling their home is just under $136,000, with the kitchen (25%) and living room (27%) being the most expensive rooms to renovate — since many homeowners think these rooms need the most work (18%).

A third of respondents would prioritize remodeling the carpet or flooring of a room above all, and a similar number think giving a room a new paint job would help revitalize it (32%). While 44 percent of homeowners have never renovated their homes before, 31 percent of those who have revamped their homes did it entirely themselves and another 28 percent had a professional’s help.

“Doing a home renovation project yourself can leave you feeling very accomplished,” says Patti LaPorte, director of product marketing at Frog Tape, in a statement. “While it may seem intimidating at first, it can also be very empowering; you are in complete control from the moment you become inspired through the placement of the last decoration in your new space.”

Where to start when it comes to home remodeling?

When it comes to design inspiration, people are most likely to turn to home renovation magazines (59%) and blogs or websites (49%). Four in five agree that it is important to have a clear idea of how you want the space to look afterward before beginning a renovation.

This mindset helps with respondents getting excited for all stages of renovating, from rebuilding and redesigning a room (37%) to painting (35%) and eventually seeing the finished product (48%), according to respondents.

Three in four would have renovated their homes sooner if it were easier to accomplish, and 71 percent would consider sprucing up their digs on their own if there were products to help make the process easier.

“If you’d like to see quality results without the cost of hiring a professional, it’s important to use professional-grade products to complete the work,” LaPorte adds. “Investing in quality items like paint, painter’s tape, and other materials and supplies will make the work process much easier and provide better results.”