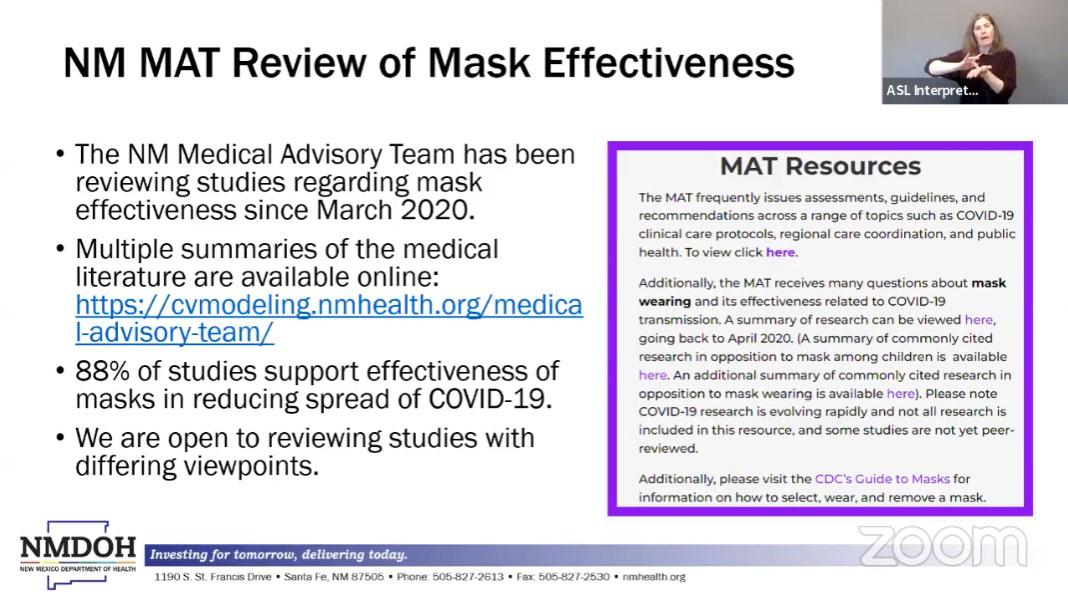 With COVID-19 cases on the decline, various states this week announced plans to rescind their mask mandates, some this week (New York), some next week (California) and others later this month and into March.

Not New Mexico. At least not yet.

In a weekly COVID-19 briefing this afternoon, Acting Health Secretary Dr. David Scrase acknowledged his email on Tuesday had been “brimming” with “demands” for the state to eliminate its mask mandate, which is in place at least until March 4 under the state’s current public health order. In response, Scrase provided a “fact check” that clarified some of the states in the news won’t actually rescind their mask mandates until the end of March.

More to the point, he noted, New Mexico hospital leaders aren’t asking for an end to the mask mandate and the state’s hospitals remain under crisis standards of care, an order that will be renewed this week.

“We don’t really make decisions in New Mexico for New Mexicans based on what other people are doing in other states,” he said. “No one wants to end it more than I do, but we have to use the science and the data we have for New Mexico.”

Scrase also reiterated the state’s reliance on studies that show masks’ effectiveness at preventing COVID-19, all of which is available online through the Medical Advisory Team’s web page. Centers for Disease Control and Prevention Director Dr. Rochelle Walensky also told Reuters this week that with COVID-19 cases and hospitalizations still high in the US, “now is not the moment” to drop mask mandates in either schools or other indoor places.

The CDC mask guidance recommends mask use—even for those fully vaccinated—in areas with substantial or high transmission. According to the New Mexico Health Department’s most recent report on community transmission, the entire state remains red, aka, has high transmission. Walensky also said there is no specific benchmark or metric that would trigger a change in guidance, telling CNN, “I don’t necessarily look at a magic number. What I do think is a really important barometer is how our hospitals are doing.”

Scrase said about the same today, noting that the state would need to see a “softening” of metrics such as the number of available hospital and intensive care beds, as well as a decreased reliance on the more than 1,500 health care workers the state and Albuquerque hospitals have brought in to help “keep our hospitals open.”

As for the current health order’s current March 4 expiration date, Scrase said he and Gov. Michelle Lujan Grisham had discussed it early Wednesday morning. “We really are relying on New Mexico data,” he said. “The pressure in the hospitals is severe and I think we’re just going to have to look at the data and see. I know [Education Secretary] Kurt Steinhaus, I know myself, I know the governor, we all really want to stop the mask mandate. But masks are effective, the state is still in hot water, and we don’t really want to do that until we feel everyone will be safe. I can’t tell you a day. But as soon as we feel like we’re getting to that day, we’re going to let everybody know. It’s just too soon today.”

As for today, New Mexico health officials reported 1,844 new COVID-19 cases, an approximate 31% increase from yesterday. The new cases bring the statewide total so far to 497,570; DOH has designated 366,955 of those cases as recovered.

The statewide test positivity rate on a seven-day rolling average declined slightly from 20.4% to 19.8%, although Scrase said today the test positivity rate is no longer a meaningful data point given the preponderance of home testing, and that there is no specific target in place, just lower is better. The health department has added the capacity for New Mexicans to self-report positive COVID-19 tests. 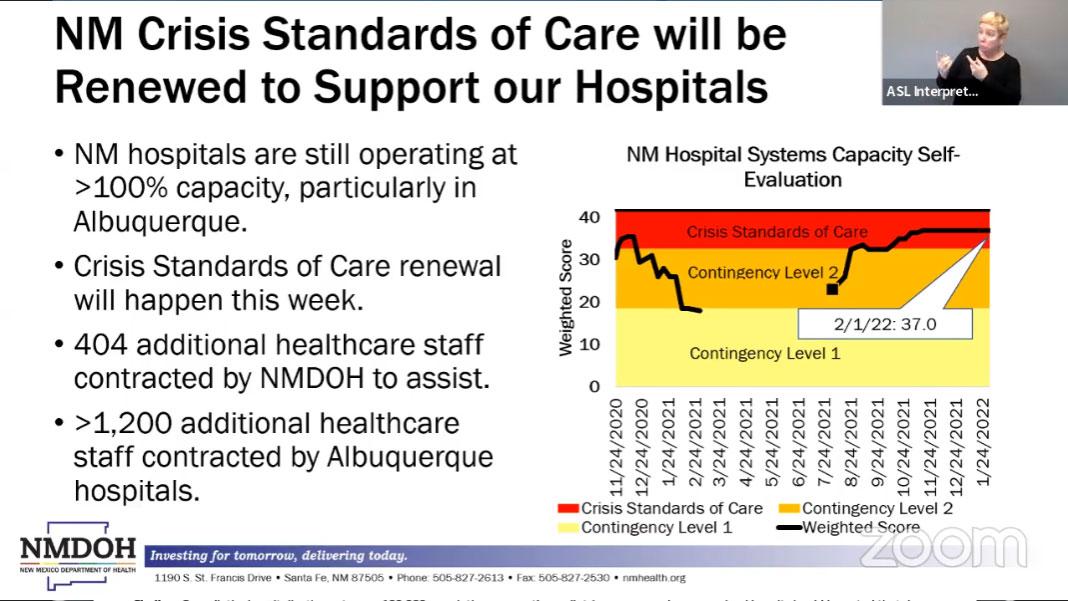 The state also reported 36 additional deaths, 33 of them recent, including two from Santa Fe County: a male in his 70s who had underlying conditions and a female in her 80s who had been hospitalized. Santa Fe County has now had 239 fatalities; there have been 6,597 statewide. As of today, 569 people are hospitalized with COVID-19, 24 fewer than yesterday.

Scrase said the state is readying for the Pfizer vaccine for children 6 months through 4 years old, following Pfizer and BioNTech submitting at the start of the month an application to the Food and Drug Administration for rolling emergency authorization.

Scrase also reinforced a push for New Mexicans to keep rapid antigen COVID-19 tests on hand at home. You can order free at-home COVID-19 tests here and find other testing options at findatestnm.org. New Mexicans living in ZIP codes disproportionately impacted by COVID-19 may be eligible for five free tests through Accesscovidtest.org. The health department is offering drive-through PCR testing through Feb. 21; to find an appointment (recommended only for people with symptoms), register here.

The state also is encouraging people who test positive for COVID-19 to seek treatments. In a news release issued today, DOH said in the last two weeks, less than 19% of the state’s oral treatments—Paxlovid (age 12+) and Molnupiravir (age 18+) had been used. People seeking treatment who do not have a medical provider can call NMDOH’s COVID-19 hotline at 1-855-600-3453.

“I think we are about to enter a transition,” Scrase said in conclusion of today’s news conference. “Our modeling team believes we will see a fall in cases soon, although this is a hard time to model because Omicron has not behaved like any of the other variants…so it’s hard to use past experiences to predict, but I think there is a general sense we will be on a downhill curve and as that happens, we look forward to easing things up. Believe me, the governor and I and everyone is just as eager as we could be to not have mandates. But we want to protect kids, the vulnerable and our hospitals right now. As soon as we get out of this, I think you’ll see a lot more change coming down the road…as our data we have on New Mexicans and not people in other states tells us the time is right.”

Newly reported fatalities from more than 30 days ago

The Department of Health has identified at least one positive COVID-19 case in residents and/or staff in the past 28 days at the following facilities:

County totals are subject to change upon further investigation and determination of residency of individuals positive for COVID-19.

Cases among people being held by federal agencies