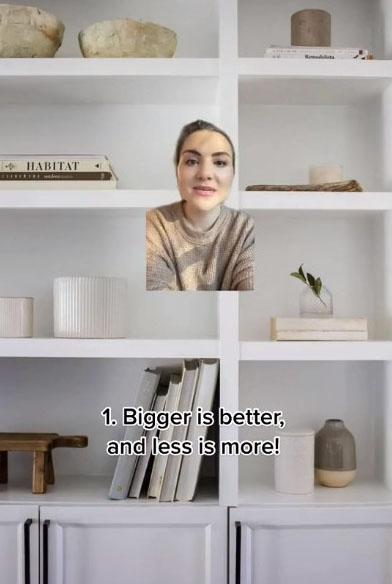 A HOME designer has shared her tips for properly styling shelves and mantels without making them look cluttered.

BIGGER IS BETTER & LESS IS MORE

Avery's first hack focused on the size of the items you put on your shelves.

The designer said that it's much more difficult to style smaller items rather than larger ones, hence why she claimed that "bigger is better."

"This doesn't mean that you can't style things really well with smaller items, it's just a lot harder," she said.

She explained that went styling with smaller items, you need to use more to fill the shelves which can make things look cluttered.

When styling with bigger decor, you put fewer items out for decoration, resulting in a much neater look.

Most read in Fabulous

BUMPED UP
NO KIDDING
CAN'T BEAR IT
HAIR THIS

For those who do choose to display smaller items, Avery suggested grouping them together on your shelf.

Then she suggested going in with the smaller ones and grouping them together to give them a bigger look.

She recommended to "picture things in a triangular matter" and to stagger items as you go down your bookshelf.

The designer said that if you're styling shelves with repeated items, skip a shelf between similar decorations.

For example, she showed shelves that had a frame on the top shelf and on a lower shelf, but the shelf in the middle of the two did not have one.

She said to play around with your decor and again mentioned staggering and grouping certain items.

"Don't be afraid to leave space in between items," she said.

"In my opinion, it's better to have a shelf with less things on it and more space around the items, than it does to try and put too much on there and have it look cluttered," she added.

To keep your bedroom looking neat, a home stylist used an affordable cover to transform the look of her bed's headboard, giving the room a much neater appearance.