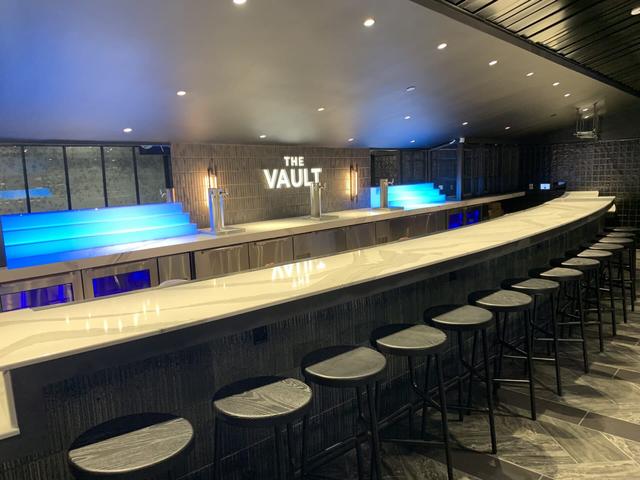 The bar inside The Vault, the new tunnel club at Bank of America Stadium. Populous designed the soccer-driven retrofit of the NFL facility. (Don Muret/Staff)

CHARLOTTE — Tepper Sports & Entertainment officials showed off the shiny new tunnel club at Bank of America Stadium this week, the centerpiece of a $50 million retrofit of the NFL venue to accommodate Major League Soccer.

Charlotte FC, an MLS expansion team, plays its first home match on March 5 against the LA Galaxy. Tepper Sports is the parent firm of Charlotte FC and the NFL Carolina Panthers.

That day also marks the debut of The Vault, the 4,500-square-foot premium lounge at event level in which the home team will pass through on its way to and from the pitch. Their locker room is behind the club.

For soccer, the 150 pitch-level seats tied to The Vault are sold out, said Jake Burns, Tepper Sports’ chief revenue officer. The cost was about $3,500 for a personal seat license and $7,200 a person for a season ticket, industry sources said. Food and drink is included in the cost.

The inventory drops to 100 field-level seats for Panthers games. Those ticket packages go on sale in late spring and more details on that process will be announced in the coming weeks,, Burns said.

Populous, the original architect for Bank of America Stadium, which opened in 1996, designed the soccer-driven retrofit. The overall project extends to a 211-foot-long LED canopy board on the stadium exterior along Mint Street and two large bars branded as the Michelob Ultra Taproom, topped with 360-degree video screens to display live game action.

Behind those bars are two new grab-and-go marketplace stands that will be equipped with Amazon Just Walk Out technology, a checkout free system that was introduced last fall at NHL arenas in Seattle and New York. The system was added late in project development and it’s unclear whether it will be place for the home opener.

Kelly Kerns, a senior principal with Populous, is part of the design team in Charlotte and he has experience working with NFL stadiums to meet the needs of MLS. Twenty-plus years ago, with the old Ellerbe Becket, Kerns served as project manager at Lumen Field in Seattle, then Seahawks Stadium. From the ground up, it was designed for both soccer and football, although Seattle didn’t have an MLS team yet when it opened in 2002.

In Charlotte, Populous took storage and little-used staff check-in areas and empty space in general on the service level to design The Vault, effectively converting it to revenue generating amenities. That’s typically the case with renovations when teams are searching for space to build premium inventory, Kerns said.

The tunnel club concept itself is a standard feature at most MLS soccer-specific stadiums, as well as in the NFL, dating to AT&T Stadium, the home of the Dallas Cowboys that opened in 2009.

For designing The Vault, Populous drew inspiration from Charlotte’s reputation as a banking hub. The name of the club itself ties back to Charlotte’s nickname as “Mint City,” Kerns said. 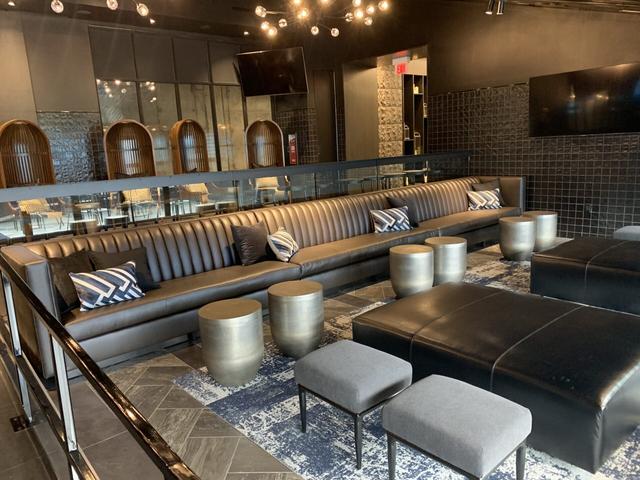 “Everybody on the Charlotte FC side put their two cents into it,” Hart said. “It’s not just for soccer; this club was designed to be multipurpose. We’re a league of thieves. We all like to steal good ideas.”

The Vault’s textured tiles, a variety of couch and chair seating arrangements, and a linear LD lighting scheme on the ceiling helps set the mood. Those lights above can change colors and create a pulsating affect, Kerns said.

Walking through the club, there’s a long bar with stone counter space and about a dozen stools, supported by a seated lounge area. Television monitors can brand The Vault for soccer or football depending on the event.

On the technology front, Daktronics produced the canopy board screen and the dual 360-degree displays above the Michelob Light Taproom bars. The canopy design has never really been done before to that extent at a sports facility. Its concave shape provided a challenge for Daktronics to create a curved, downward facing LED structure and maintain a seamless, dynamic display, Kerns said.

“It’s going to create some cool messaging throughout the week as well as greeting fans and other event goers,” he said. “They anticipate (about) 12 million impressions over the course of a year that people will see. It also provides some cover for people entering the stadium.”

The grab-and-gos replace three old belly-up style concession stands. They were strategically placed on the east end where Charlotte FC supporters end their march to the stadium for soccer matches, Kerns said.

Charlotte FC players will pass by this lounge space in The Vault on their way to and from the pitch. (Don Muret/Staff)

On its own, Levy built a 2,800-square-foot kitchen at event level as part of servicing The Vault and The Gallery, a group of 14 bunker suites in the stadium’s west end zone that officially opened in 2021, said Carter Witt, the firm’s vice president of hospitality and strategy.

All told, Tepper Sports & Entertainment can now boast about a stadium showcasing two of the nicest event-level clubs in pro sports to meet the needs of premium patrons for multiple events.

It’ll do for now, considering David Tepper, owner of the Panthers and Charlotte FC, remains committed to building a new stadium not far from the current facility.

Until then, Bank of America Stadium, which underwent $175 million in renovations over the past decade before Tepper bought the team in 2018, will stay busy.

“I checked the calendar over the next year and between soccer, (five) concerts and other events, we have over 35 additional dates besides NFL games,” Hart said. “We get to keep a lot of people happy and enthusiastic. Over the next few years, we might see different (renovation) ideas.”