Looking back at the Hood, a center of controversy | The Dartmouth 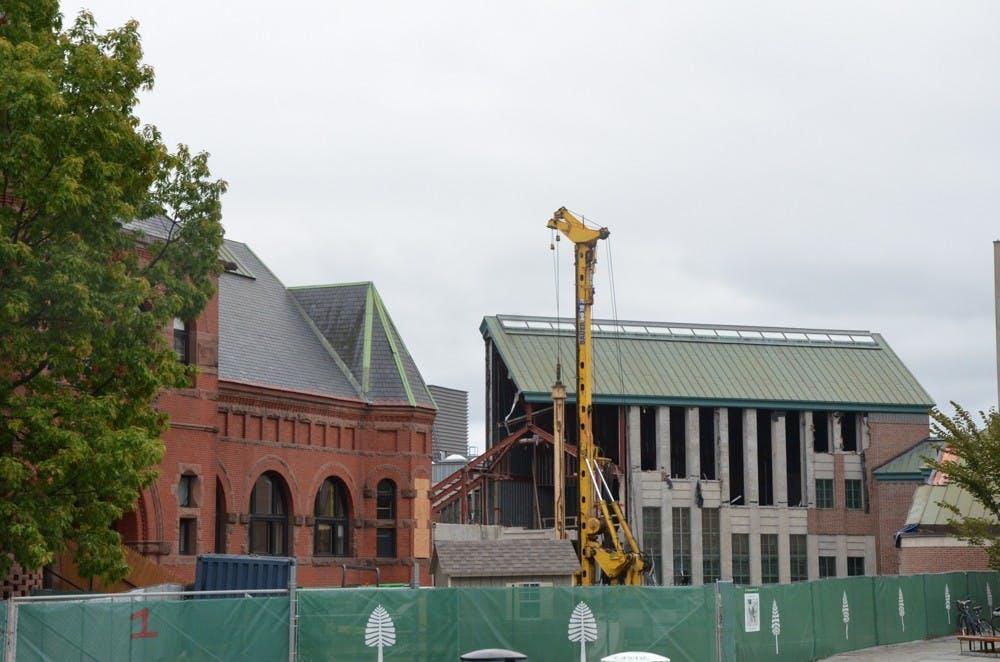 Looking back at the Hood, a center of controversy | The Dartmouth

While many in the art world had issues regarding the renovations, staff and students have largely moved past the initial criticism.

This article is featured in the 2022 Winter Carnival special issue.

In 2016, the Hood Museum of Art broke ground on a $50 million renovation, an expansion of the College’s Art District that was part of President Hanlon’s Call to Lead Campaign. According to the New York Times, the renovations removed the original museum’s features designed by postmodern architect Charles Moore, and as a result attracted much controversy — critics argued at the time that the new designs mistreated the meticulously planned and deeply meaningful original architecture. The College and museum staff, however, argued that the renovations were necessary and respectful to Moore. Since the Hood’s reopening in Jan. 2019, they posit, the renovations have allowed the Hood to expand its ability to meet the museum’s mission of being a dynamic teaching museum.

The original Hood Museum, a 40,000-square-foot postmodern building, was constructed of Flemish bond brick with a gray brick cornice and a copper roof. Its purpose was to house the thousands of pieces Dartmouth had collected since the 1770s under one roof. Opened in 1985, Moore’s museum featured ten galleries, a study-storage facility, administrative spaces and an auditorium capable of seating around 200 people. The Hood was intended for a much smaller collection, staff and educational program than now exist. The building also had some structural issues; it was built without a vapor barrier, allowing for mold, mildew, rot and rust to form below the crumbling roof.

Architects Tod Williams and Billie Tsien, internationally acclaimed for their modernist and meditative style, were chosen by a committee to make renovations and expansions to Moore’s museum. Williams and Tsien intended to create —from an architectural standpoint —“a quiet space,” according to the Hood website. Through the use of minimal color and simple forms, the museum acts as a functional space where the artwork is the first and foremost feature visitors notice and engage with.

Although the advancements made by Williams and Tsien have allowed the Hood Museum of Art to fulfill its purpose as a teaching museum, critics charged that the new design completely destroys Moore’s conception. According to Metropolis, an architecture magazine, the renovations have become popular with the architectural press because of the controversy they sparked.

Williams and Tsien’s renovation of the Hood is quite ironic —the Museum of Modern Art’s Folk Art Museum, designed by the pair, was demolished in 2014 to make room for new galleries.Just as some protested the renovations, Williams and Tsien protested the demolition of the Folk Art Museum. For some, it was paradoxical that the same architects would destroy a “gemlike” work by another well-respected architect, Charles Moore.

E.J. Johnson, author of “Charles Moore: Buildings and Projects 1949-1986,” told The New York Times in 2016 that what Tsien and Williams did to Moore’s building was “insensitive.”

“It’s almost as if they were getting revenge for what MoMa did to their Folk Art Museum,” Johnson said.

Yet more irony arises; Tsien was one of Moore’s students at the University of California, Los Angeles. Tsien said in 2016 she believes the new design is respectful.

“We’ve moved some things, we’ve added some things and we’ve restored a lot of things,” Tsien said. “We’re doing a lot to take care of his legacy. It’s not keeping it exactly the same, but it’s keeping it alive.”

At the time of the controversy, Kevin Keim, director of the Charles Moore Foundation in Austin, TX, said that he was outraged by the renovations.

“Not only is the entire north end of the original building being destroyed, but the entire conception of Moore’s building is being fundamentally wrecked,” Keim said in 2016. “Charles Moore deserves far better than this aggressive, ill-designed, shallowly considered project.” 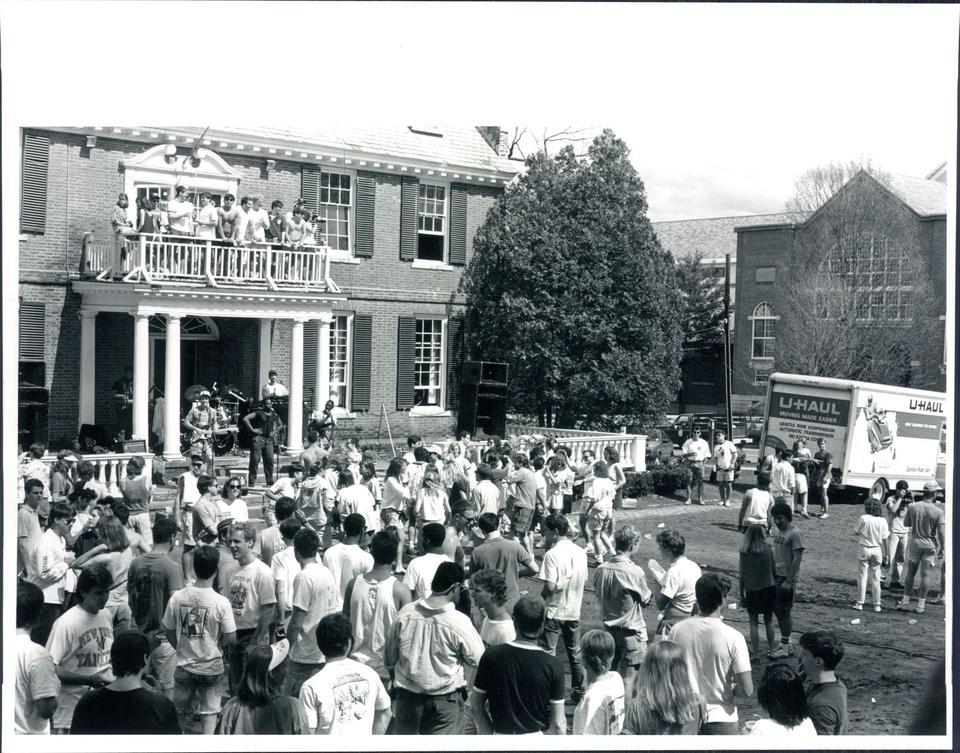 Hood Museum director Stomberg said that although he “respects” critic’s opinions, he believes most of them have never even seen the museum in person.

“There’s nothing I can ever say to a true lover of Charles Moore’s architecture that’s going to make them feel comfortable with this building,” Stomberg said. “One of [the critics] said to me, ‘You can’t touch a single hair on its head,’ but the [new] building really works.”

Former deputy director at the Hood Juliette Bianco ’94 was able to experience Moore’s Hood as both a student and employee of 25 years. Bianco, now the director of the Weatherspoon Art Museum at UNC Greensboro, believes that Moore did not anticipate the conversations students could have when they visited the museum and witnessed the juxtaposition of objects from different cultures and time periods.

“The [original] Hood was built as a house to ensure the safety of all these objects,” Bianco said. “Over the course of the next 30 years, through practice, we learned that in fact, these objects had a unique and powerful role to play in the education of the students at Dartmouth.”

Stomberg believes that Moore intended to create a space that was as much about architectural experience as it was about art.

“There was a lot of architecture here,” Stomberg said. “For example, you couldn’t find the front door, so you had to work for it, and you had to enter through a gateway and then go around and walk up a walkway.”

Moore’s architectural antics did not end at the inconspicuous front door. Once you figured out how to get into the museum, there were stairways and dead-end halls around every corner, similar to a labyrinth.

“Everywhere you turned, you were really aware of the architecture,” Stomberg said. “And I think that must have been what [Moore] intended: for the architecture to be a participant in the aesthetic experience of the visit in a loud way.”

According to Stomberg, the committee gave Williams and Tsien four key tasks to achieve in the renovations. The first was to make the Hood visible from the Green. Second, Moore’s courtyard proved to be inconvenient during the harsh New Hampshire winters, so the committee wanted the renovated Hood to have an indoor social space. Third, the Hood wanted more galleries to display the 65,000 pieces they now own. The committee also wanted to expand the teaching space from the original combined study-storage facility and add more staff offices, as Moore’s museum was designed for a staff of only ten.

As a result, the Hood expansion required an entrance that students can easily locate from the Green. Visitors enter through an indoor atrium where special events and day-to-day student activities can take place. The Hood also gained five new galleries, allowing for a more diverse set of collections, such as Aboriginal Australian art, Native American art and signature modern works by artists such as Ed Ruscha, Mark Rothko and Lorna Simpson. Lastly, the Hood’s curricular access for faculty and students from all four schools and 40 departments and interdisciplinary programs was tripled. With the addition of the Bernstein Center for Object Study, the Hood now features an object study center with three technology-enhanced object-study rooms inside.

Hood academic programming curator Amelia Kahl ’01 said she hopes students know the Bernstein Center is not just for art majors. Kahl noted that across multiple disciplines, the Hood Museum is a valuable source for students.

“I just hope, even though the Bernstein Center for Object Study isn’t as visible as the galleries, students can understand that we’re there and will take advantage of us as a resource,” Kahl said.

Lawson Greene ’25 said he appreciated the fact that the Hood incorporates art into Dartmouth’s liberal arts curriculum, which is sometimes forgotten.

“I think that sometimes in the liberal arts model, we sometimes forget about the arts,” Greene said. “I think that having the Hood here on campus and available to students regularly, is a way to keep the arts present in our lives. It’s nice to have a museum on campus that you can go to with rotating exhibits and especially student involvement.”

Isla Kilby ’25 enjoys the connection the Hood Museum creates between Dartmouth and the Upper Valley.

“I think what’s really cool about the Hood is that it has all this amazing art, and it really is something that both Dartmouth students and people from the Upper Valley can be a part of,” Kilby said. “Elementary and middle schools come to the Hood to learn, and it’s just a really cool way to connect Dartmouth to our community.”