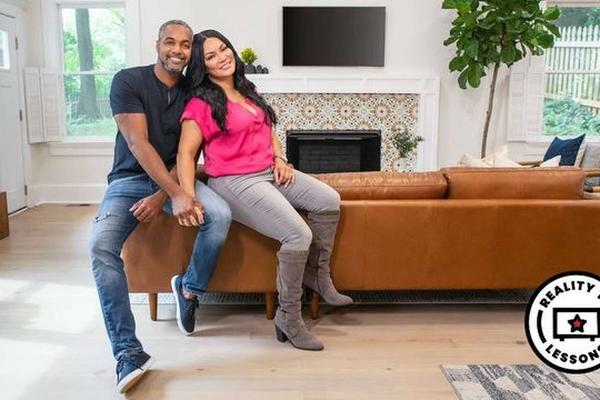 In the Season 1 episode “Greatness in Grant Park,” Sherrod and Jackson meet Aaron and Abby, a couple moving to Atlanta from Washington, DC. These two are determined to find a “designer bungalow” in the Grant Park neighborhood, but their max budget of $475,000 won’t cut it in this popular area. Aaron admits that they have “Champagne taste on a beer budget.”

Still, Sherrod and Jackson are certain they can create Aaron and Abby’s dream house by fixing up an older bungalow in their desired area. The couple end up spending $400,000 on a two-bedroom home built in 1950, which leaves Sherrod and Jackson just $75,000 to spend on repairs and updates.

Read on to find out how Jackson and Sherrod make over this fixer-upper for less, and learn some clever tips for adding high-end style to your own abode.

Add a porch swing for a welcoming entry

Even before renovations start, Sharrod and Jackson know that this house has curb appeal to spare. With a calming blue exterior, a big tree out front, and even a vegetable garden, the front yard has a lot to offer. Still, to make this outdoor area feel extra homey, Jackson decides to add one special feature to the porch.

“I’m putting up a new porch swing,” Jackson says. “But we can’t just throw bolts on there and think it’s that easy. I actually have to open up the porch ceiling and brace it, put blocking in there.”

When the porch is finally done, the swing adds the perfect seating area and makes the entire house feel extra welcoming.

Now, Jackson says, “Abby and Aaron will be able to truly enjoy their front yard.”

Add shelves and color to help a TV blend in

“There really is a furniture placement issue in this house,” Sherrod says. “And now that we opened up that kitchen, it makes it even more of an issue. Where do you put a television here?”

They arrange a new couch and two chairs around a small table, then mount the TV in a surprising space: behind the front door. It’s an odd spot, but they’re able to make this TV mount look like a feature.

“We had this idea to mount the TV on the wall next to the front door and create a surround for it,” Jackson explains. “That way, it disappears into the background as well.” 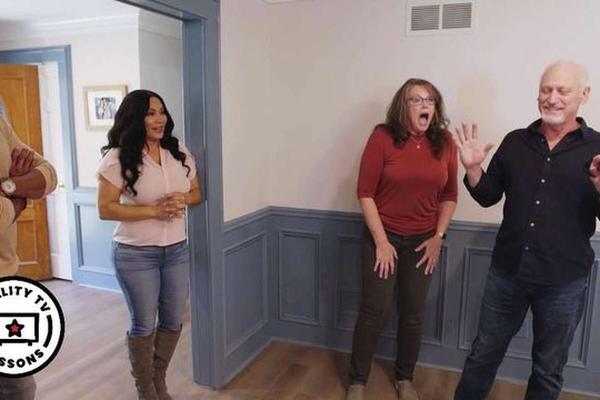 “We’re going to call it the ‘anti-feature wall,'” Sherrod says.

In the end, this corner of the living room looks great. With a burnt orange color and white floating shelves, this TV mount looks like a work of art rather than an eyesore.

Of course, Abby and Aaron aren’t too impressed with this home’s awkward 1950s kitchen.

“The format and layout of this kitchen make no sense at all,” Abby says when she first sees the space. “It’s completely segregated from the living space. There’s this huge chunk of space that isn’t being used at all.”

So Sherrod and Jackson give this space a completely new look with a more functional layout, a new island, quartz counters, and open shelving in a natural pine color.

“They’ve got a really nice, rustic, antique look to them,” Sherrod says of the shelves, “which I think is going to add some contrast to the white kitchen.”

In the end, these shelves are a great addition that keeps this small space from feeling closed off. Plus, they add a natural element that warms up the room.

“I just hate it,” Abby says. “I feel like using larger tiles is doing such a disservice to such a delicate space.”

She mentions that she likes smaller hexagon or square tiles, and Sherrod takes note, switching gears and selecting a more delicate square tile. It’s a good lesson that homeowners should take scale into consideration when choosing finishes.

Paint a headboard to save some space

When the end of this renovation is in sight, Sherrod and Jackson decide to make over the bedroom and office, too.

“Our original plan didn’t have us doing anything with Abby and Aaron’s bedroom or office, but with all the permitting delays, we just really wanted to do something special for them,” Jackson says. “So I’m finding a budget-friendly way to still give those rooms a makeover.”

They end up painting both rooms, with Sherrod finding a colorful way to include a headboard in the main bedroom. She paints a blue half-circle where a headboard would be, saving space in the room and keeping the bed from blocking the view.

“The window was right in the middle of the wall where the bed should go anyway, so it would have just blocked the window,” Sherrod says. “This way, we create this feature wall. We still put the bed there, embracing the window.”

It’s a clever fix that hardly costs anything and freshens up the space dramatically.