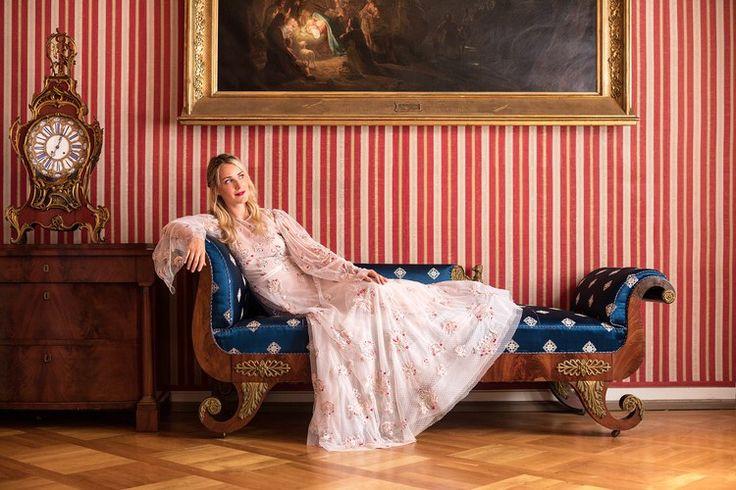 Germany’s very own royal wedding took place this past weekend. Prince Ernst August Jr., a banker, married London-based, Russian-born fashion designer Ekaterina Malysheva in Hanover on Saturday. After dating for six years, the prince proposed during a family vacation on the Greek island of Spetses, and while most in the United States were wrapping up a week of Fourth of July festivities, the couple celebrated with a series of wedding events. The ceremony, which marks the first time a Hanoverian prince has married in the historic Market Church in 66 years, took place before 600 guests. The bride wore three outfits all custom made by Lebanese designer and longtime friend Sandra Mansour during the course of the weekend. “I always knew Sandra would design my wedding gown,” says Malysheva. Mansour, who once worked for Elie Saab, is known for her tasteful embellishments like hand-placed sequins, beading, and embroidery. “All three gowns were inspired by my Russian heritage and had a very ethereal, romantic feeling,” explains the bride.

The sequence of looks kicked off with a lace dress accented with Russian floral motifs in pastel colors and a touch of red, which the bride wore to a pre-wedding party on Friday, July 7. Her princess-worthy bridal gown was done in a Chantilly lace and embellished with elaborate beaded details. The bead and thread embroidery alone took more than three months to create by hand. Malysheva’s veil incorporated a family heirloom from the prince’s family: a jeweled headband created for Princess Victoria Luise, daughter of Germany’s last kaiser, for her marriage to Ernst August III, the groom’s great-grandfather. She also wore her mother’s diamond studs. “I kept everything else very simple, as my dress was quite elaborate,” says Malysheva. Later that evening, she changed into a party dress for dancing. Inspired by the Claire de Lune dress, the signature gown from her Spring 2017 collection, Mansour revisited the same silhouette in a fabric that transitioned from off-white to blush pink and added beaded details and embroidery.

“I wore the most comfortable shoes I know to all three events!” exclaims Malysheva. “A pair of pumps by Fabrizio Viti, the Candy sandals by Saint Laurent, and pair of satin Jimmy Choo pumps.” She also accessorized with a pair of dangly white diamond and ruby earrings by Spanish jeweler Suarez to match her late-night party dress. The bride’s makeup artist, Ahmed El-Ali, was flown in from London. “He’s literally the best, funniest, most lighthearted guy in the world,” says Malysheva. “And it really helps that he’s an absolute genius at makeup.”

While the wedding was a picture-perfect fantasy, it didn’t come without its fair share of family drama, however. The groom’s father, Prince Ernst August, announced on the Monday before the big day that he opposed the marriage due to matters surrounding property and, as a result, refused to attend. (Apparently, the older prince wants land and titles gifted to his son turned back over to his possession, including Marienburg Castle, where the wedding dinner was held.) The groom’s mother, Chantal Hochuli, was there, but his stepmother, Princess Caroline of Hanover, who has been separated from the groom’s father since 2009, opted out. That said, her approval of her stepson’s match was likely indicated by the presence of all of her children at the festivities. Andrea Casiraghi and his wife, Tatiana Santo Domingo, and their son Sacha and daughter India, were in attendance. The children served as page boy and flower girl and wore Marie-Chantal children’s outfits. Pierre Casiraghi and his wife, Beatrice Borromeo, and Charlotte Casiraghi were also on hand. Princess Alexandra of Hanover, Princess Caroline’s only daughter with Prince Ernst August, served as a bridesmaid. And, Prince Christian of Hanover and his fiancée, Alessandra de Osma, and Princess Elisabeth von Thurn und Taxis rounded out the glamorous group of royals there to support the couple.

After the ceremony, church bells rang in celebration and thousands who had gathered outside, many dressed in traditional costume, cheered as the newlyweds exited. A local honor guard also saluted them as they made their way to a fairy tale–style horse-drawn carriage. The couple, who already had been married in a civil service at Hanover’s town hall on Thursday, then celebrated with a luncheon at the historic Herrenhauser Gardens, followed by a dinner at Marienburg Castle. Following a lavish meal, the two danced to Otis Redding’s “I’ve Been Loving You Too Long.” Later this year, they plan to leave the castles and Old World luxuries behind in favor of further indulging their love of blues music with a honeymoon trip following the Blues Trail through the Deep South. We can’t help but hope the newlyweds make a stop at the home of the King—Graceland.