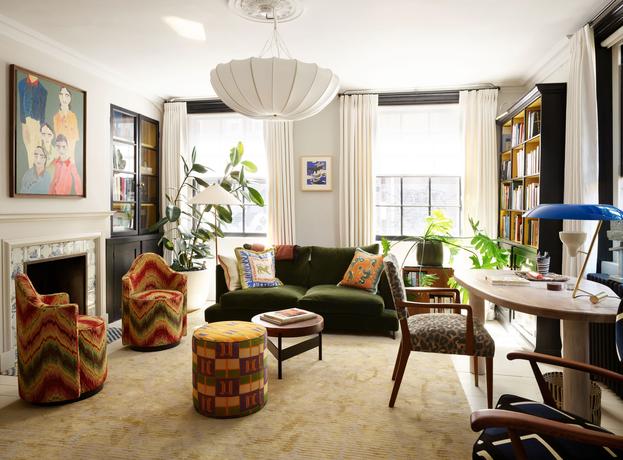 All products featured on Architectural Digest are independently selected by our editors. However, when you buy something through our retail links, we may earn an affiliate commission.

Just a few strides from the bustle of Brick Lane in London’s East End—where the sweet, spicy scent of the street’s famous Bangladeshi curry houses fills the air—hides a gorgeous Georgian-era gem of a house that British interior designer Sophie Ashby and her husband, fashion designer Charlie Casely-Hayford, currently share with their daughter, Gaia, born last May, and Casely-Hayford’s seven-year-old daughter Rainbow when she comes to stay on weekends.

Having outgrown their one-bedroom apartment in West London, the family rented this place in February 2020, just weeks before the world went into lockdown. “We could have bought a house, but I knew it wouldn’t have been one I was happy to live in for the next five to ten years,” Ashby says. Instead, they decided to “sit tight, plot and plan,” she explains, while testing out the area for a potential permanent move.

Cosseted by a verdant courtyard garden of magnolia, fig, and bay trees, the former brewer’s house they now call home adjoins a small pub and 19th-century brewery next door, currently being converted by art duo Gilbert & George into a gallery. “I couldn’t believe my eyes when we walked in,” Ashby recalls. The simplicity of the walls, ceilings, and floors, washed with cool neutral hues by the current landlord, alongside the “ancientness,” as Ashby describes it, of the house’s original clean-lined, generously proportioned bones, was “so sophisticated,” she gushes. “I just thought, We’ve got to make this work.”

Part of the house’s charm, including fireplaces bordered with pretty Delft tiles and kitchen cabinets recycled from old iroko-wood chemistry labs, owes much to the eclectic touches left behind by the late Jocasta Innes, author of the seminal ’80s guide to DIY specialist painting effects Paint Magic, who rescued the house from dereliction in the late ’70s. “The combination of Jocasta and our landlord’s good taste created the perfect backdrop,” Ashby says. “It just spoke to us.”

So, aside from “tiny tweaks” like repainting a few cupboards and a floor here and there, Ashby was free to focus on the furniture, lighting, and art. Into a high-low mix of reupholstered vintage chairs and antique cabinets, affordable high-street buys and bespoke sofas, the designer injected vivid brights such as fiery orange and banana yellow alongside sophisticated shades of fuchsia, sea green, and gold, all inspired by the paintings and photography, mostly by emerging artists, the couple have hung on nearly every wall.

“It’s how each room begins,” says Ashby of the couple’s long-held mutual love for art, since both studied art history during college and Casely-Hayford interned at London’s prestigious White Cube gallery. Works by the likes of London painter Tomo Campbell, South African artist Lunga Ntila, and Spanish photographer Salva López draw a connective thread through each space. Even the large family bathroom, where a gallery-style installation of framed drawings and exhibition prints, combined with vintage furniture and contemporary lighting, feels “more like a living room,” she says.

In the actual living room, Ashby employed warm, citrusy shades, inspired by the colors of the Heath Wae paintings filling one of the walls, to counteract the house’s west-facing darkness. “I didn’t know if it was going to work, but it has created a room that is really lovely, particularly in the evening, because it has a nice glow to it,” she says.

The overall effect is what Casely-Hayford’s late father, the esteemed British fashion designer Joe Casely-Hayford (with whom he established their namesake menswear brand in 2009), would have called “harmonious discord,” he says. “It’s how I think of Sophie’s study, because it’s not easy; there’s a lot going on in there, and I feel like it works perfectly,” he continues proudly. “But she’s the only person I know that could do that, because it could quite easily just tip over the other way. Every time I walk into that room, it makes me feel alive because there’s something for me to engage with. It invites conversation.”

To the TradeShop Now at Dedar

This is not to say the house doesn’t feel relaxed as well. “I don’t want everything to feel like it needs to be standing to attention,” Ashby says. Incorporating the “aged quality” of upcycled kilim rugs and cushions fashioned from antique kantha, kente, and sari cloths has also lent each space warmth; quirky objets d’art, from Nepalese tiger money boxes to “Woolly” the fluffy sheep—“in the style of Lalanne but definitely not a Lalanne,” Ashby says with a laugh—add further whimsy.

Indeed, the home has become a real sanctuary for the designer, who, between juggling residential, development, and hotel projects, has been busy setting up a vast new office and showroom space for both Studio Ashby and its lifestyle offshoot, Sister, within the grand surrounds of an early-1700s school building neighboring Buckingham Palace. All while also guiding United in Design, the trailblazing training initiative she established with fellow interior designer Alexandria Dauley following the Black Lives Matter protests in 2020, which works with businesses to create more opportunities for people of color within the U.K. interiors industry through apprenticeships, internships, and other programs.

“People are so afraid of doing things they might get bored with. I never have that feeling,” Ashby says of not thinking twice about certain bold choices, like reupholstering the kitchen chairs with a lively abstract print. “I don’t often have clients who want to go with something this African, so I thought, Sod it, I’m going to do it for my own house because I love it.”