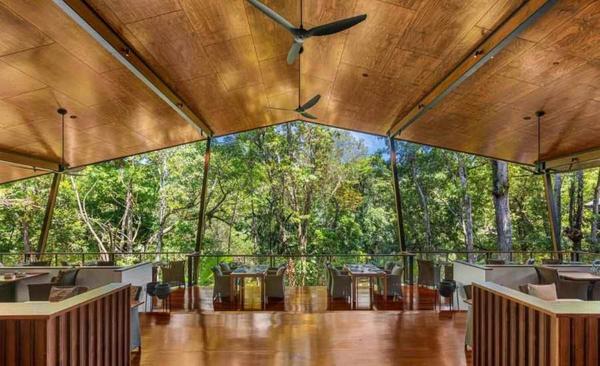 Baillie Lodges can never be accused of resting on its laurels. Just two months after opening the new-look Silky Oaks Lodge with its COVID-challenged $20-million renovation, the rebuild of the company's much missed Southern Ocean Lodge on Kangaroo Island starts in February, two years after the original was destroyed in devastating bushfires.

And next up, in the Barossa Valley's cool season, the company will begin renovating gourmet destination, The Louise, which joined the family in October.

For now, though, the luxury-meets-nature specialist, founded by Australians James and Hayley Baillie, is basking in the glow of the late December opening of the new Silky Oaks under the Baillie banner. The Daintree Rainforest property, which dates back to the mid-1980s, was under the auspices of P&O from 1994 until 2004, who expanded it. After further ownership changes, Baillie took over in 2019 and closed it in 2020 with a view to reopening that same year, having planned to reinvigorate it in line with Baillie Lodges' high standards.

Then the pandemic caused delays and postponements. Now, finally, it's showtime, and the group's Craig Bradbery is confident the property's legion of loyal return guests will love the renewed offering as much as the old.

"We believe guests will be very happy to see a new, more contemporary feel for the property while the elements that made it so special remain," he says.

Get the latest news and updates emailed straight to your inbox.

By submitting your email you are agreeing to Fairfax Media'sterms and conditionsandprivacy policy.

In collaboration with the Baillies, Port Douglas-based architect Gary Hunt and interior design team Pike Withers have instilled a light, open-aired, clean-lined aesthetic, stepping away from the Asian-inspired look that inhabited the lodge previously.

And art adds to the immersive effect. "Hayley Baillie has led the direction on finding local Tropical North Queensland and broader Australian artworks for the property to really deliver a sense of place for guests," Bradbery says.

"Guests will see the mesmerising works of commissioned artist Catherine Nelson featuring the rainforest and local First Nations Kuku Yalanji kids playing in the river, the artwork of award-winning Indigenous artist Danny Mellor and a series of ceramic 'heads' created by Sydney-based ceramist Malcolm Greenwood, whose tableware is a trademark across each of the Baillie Australian properties."

But much loved touches, such as the hammocks to laze in, remain. And, says Bradbery, "The Jungle Perch that cantilevers from the restaurant into the rainforest and the popular Healing Waters Spa are still very much part of the experience."