In his 1969 speech, The Artist’s Struggle for Integrity, James Baldwin began with two propositions: the first in which he said, “The poets, by which I mean all artists, are finally the only people who know the truth about us.” He noted in the second that in our present times, it would be awful for a civilization to cease to produce poets or to believe in their observations. To engage art as a poetic involves a willingness to chart unknown courses with grace and patience, trusting the guidance of our inner compass.

Barbara Earl Thomas (BA, Design, 1974; MFA, Painting, 1977) personifies this with a unique ease, made clear by her accomplishments which stem from committing to a disciplined practice of her craft, while trusting in chance, her instincts, and her community. Such a balance is often difficult to attain for many reasons, yet it seems for her a natural embodiment.Thomas, who studied under the direction of world-renowned painters Michael Spafford and Jacob Lawrence, is herself an award-winning artist and writer represented by Claire Oliver Gallery in New York.

Thomas describes herself as a deep-thinking daughter of the American South and the first in her family to be born in Washington state.Her family migrated to the Pacific Northwest as did many Black families in the 1930s through 1970s, settling into the segregated area of Seattle's Central District.Her childhood home was not an art house, but one filled with activities of functional yet meticulous decorative crafts her mother taught her, or fishing and gardening work she and her sister would do with their father. While she enjoyed working creatively, she never envisioned a future as an artist, nor did she know one could choose to do such a thing.A fundamental ethic in her family was getting an education and being self-sufficient. 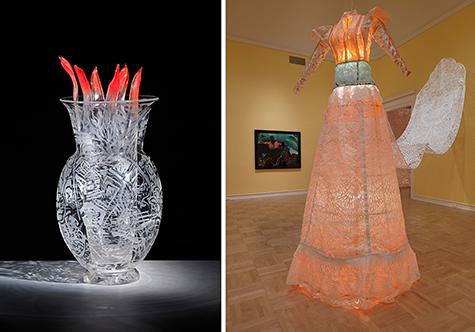 Over a lifetime of creative discoveries, Thomas has produced paintings, glass sculptures, monumental immersive installations, and paper cut works that have been acquired locally and nationally by private and public collectors and institutions such as 21c Museum Hotel in Kentucky, the Bill & Melinda Gates Foundation, Henry Art Gallery, the Minneapolis Art Institute and the Portland, Seattle, Tacoma, and Weismann Art museums. Since the early 1980s, Thomas has produced work for over 50 group exhibitions and 20 solo gallery and museum exhibitions.She has also created approximately a dozen public works, soon to include a new stained-glass commission for Hopper College at Yale University in 2022, and her second commissioned installation at Seattle Sound Transit’s Judkins Park Station for 2023.

Though she has incorporated poems in her visual work, Thomas describes herself more as a writer of prose and travel stories, and she is still fluent in French after spending a year in France at the University of Grenoble in 1976.She has also authored principal essays for artist monographs such as Cappy Thompson and Joe Fedderson, but her principal materials and tools are paper, knives, paint, Tyvek (synthetic high-density material typically used as a weather barrier for buildings in construction), glass, metal, color pigments, and illumination. Thomas creates cuts to reveal exquisitely complex compositions of light and dark. Her works are graphic yet delicate, subverting the violent and divisive storylines of our social and political times into fluid metaphors of brighter possibilities.

Thomas works with a team of cutters, artists, cultural practitioners, and friends who help to bring, as she says “the results my thinking” to life.And her thinking reflects an avid reader concerned with “what is happening in the world.” Rather than representing pain however, she offers a lovingly tender elevation of Black people and their stories. Experiencing her installations is akin to entering a kaleidoscopic world of shadows with strange yet immediately familiar forms, tones, and textures, drawing us into a communal prism of inverted self-reflections.