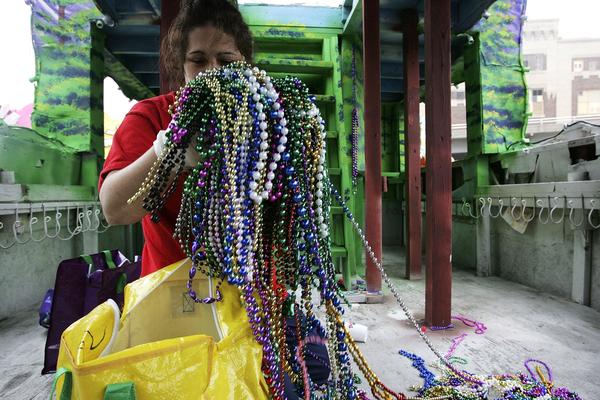 Lucky spectators at the 2022 Freret or Tucks parades could catch one of the rarest Carnival throws ever. At long last, biodegradable beads, containing plastic made from algae in an LSU laboratory, are ready to be tossed.

For ecologically minded parade-goers, worried that imported plastic throws might eventually bury New Orleans like lava buried Pompei, it’s a hallelujah moment. Finally, there will be beads designed to melt away, eventually, under the sun’s ultraviolet rays and New Orleans' abundant rainwater. Finally, float riders will be able to fling necklaces without the guilt associated with clogging the city’s storm drains and landfills. Finally, Carnival will have gone green.

Or not. Naohiro Kato, the cell biologist whose research led to the environmentally conscious beads, isn’t celebrating. Kato says the experiment in making biodegradable beads has taught him that such beads are not the answer to the greening of Carnival. His algae-born plastic could have practical applications, but, in his studied opinion, Carnival throws might not be one of them.

It was about nine years ago that a happy accident took place in Kato’s lab, when an algae-filled beaker was accidentally left unrefrigerated overnight. It was then that Kato noticed the “wet and gooey” microscopic plants had produced a promising oily substance.

By drying out and powdering the oily algae, Kato discovered he could produce something like moldable plastic, with the added benefit that it would eventually break down in the natural environment.

Kato is 53. He was born in Tokyo and came to the United States in 1998. He said that when he took a job at Louisiana State University in 2005, he wasn’t sure where Baton Rouge was. When he and his wife bought a house in his new hometown, they had no idea why they were being congratulated for having found a home along the route of the Krewe of Southdowns parade. But soon enough, Kato came to appreciate Carnival customs, including the tossing of beads and doubloons.

Too, he soon recognized that beads and doubloons had ecological drawbacks. Which was a problem, and an opportunity. Because Carnival throws have such symbolic importance, why not use them as algae plastic product prototypes?

The trouble with the original algae-based beads and doubloons, which Kato produced in 2014 and 2018, was twofold. First, they were the color of cooked okra. And second, it would take a custom-designed industrial process to produce them in large enough quantities to compete with the conventional plastic beads that workers in China were pumping out by the freighter full.

So Kato set out to find a plastics fabricator that might be able to pioneer the manufacture of his biodegradable throws on a grand scale. Sure, he could have searched for an overseas manufacturer, but he wanted to keep production in Louisiana. Lucky for him, he found Noble Plastics Inc. in Grand Coteau, where the owner, Missy Rogers, not only agreed to try, she agreed to do so at a price Kato could afford. The bead project was funded by a $10,000 grant from LSU, a tax credit from the state and Rogers' largesse.

Rogers said her bread and butter is manufacturing objects for use in the oilfields, heavy manufacturing and the defense industry. But, she said, “We like to keep our souls engaged by working with local inventors. ... We’re big-time nerds, and we were really into it.”

But, she said, it was “surprisingly difficult,” especially as she hoped to automate the process as much as possible.

In the end, Rogers’ company figured out how to mold beads, but the research and development necessary made the beads cost “a ridiculous amount.” 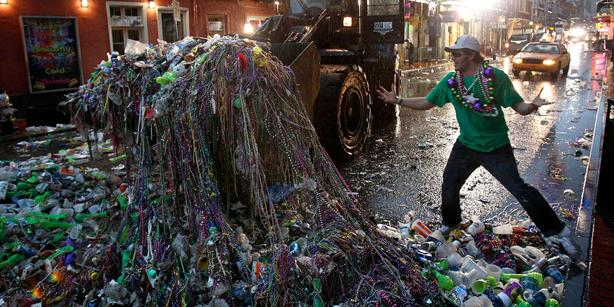 Volume is key to making biodegradable beads a viable alternative, she said. If you produced bead necklaces by the millions, you might be able to sell them at only 2½ times the price of conventional plastic beads.

Part of the problem is that the biodegradable material itself is costly. Rogers said that all around the world inventors are scrambling to produce commercially competitive green plastics. “There are so many people chasing the same magic pill,” she said.

In fact, in March 2021, a company called NexEvo announced that it was bringing starch-based biodegradable beads to the marketplace.

Kato said that in order to get his algae plastic to work, it had to be mixed with large quantities of commercially available biodegradable plastic - the sort of stuff they use to make environmentally friendly disposable knives, forks, and spoons.

The beads that Noble Plastics produced are black, not okra green, and each 6-millimeter orb is embossed with a letter, so that each 32-inch strand spells out “MADE WITH ALGAE LSU,” over and over again. The threads onto which the beads are molded are made from durable, but degradable, hemp.

Kato said he can’t be sure how long it will take for the “MADE WITH ALGAE LSU” beads to degrade. If a strand were to get snagged in an oak tree, it might take only a year or so for the hemp string to fail, and maybe another five years, more or less, for the individual beads to fade away. He said conventional plastic beads could last for a century.

Freret and Tucks were the earliest krewes to express an interest in the beads, Kato said. So when some were finally available, he delivered 10- and 20-foot lengths of beads to the krewes, asking that they be cut into 32-inch segments and tied into necklaces. Each krewe should end up with 160 strands to throw.

Which certainly makes Kato’s 2022 beads among the most collectible catchables of all time.

Rogers said it’s tough to figure out what each necklace cost to produce, but considering all that went into producing them, she’d guess that each strand cost more than $50.

And that’s the rub.

Rogers is still optimistic that someday, biodegradable beads could enter the market at relatively reasonable costs. But Kato has become disenchanted with the whole concept. For now, at least, the idea of biodegradable throws is illogical, he said: They work only if they’re “the ones you don’t care about,” he said. For the beads to deteriorate and return to the earth, they must be left on the earth in the first place or thrown away. If they are rare and “very precious,” he said, they’ll never replace the disposable conventional plastic beads that are causing all the problems.

He said it would make more sense to use his algae plastic to make, say, fishing net floats that inevitably get lost at sea and should therefore be biodegradable.

Kato said he’ll continue to consider ways to manufacture biodegradable beads efficiently. But in the end, he said, they won’t be the solution. Instead, he said, Carnival krewes just have to provide fewer, more desirable throws, such as the old-time glass beads that can be worn again and again.

The Freret parade takes place Feb. 19 starting at 6 p.m., the Tucks parade Feb. 26 at noon, both on the Uptown New Orleans route.

COVID-19 was an invisible, unwelcome guest during Mardi Gras 2020, causing the Crescent City to become a pandemic hot spot. Then, the virus ov…

Save 28% on this massaging footrest for the ultimate stress relief