Building security, one bed at a time - The Press 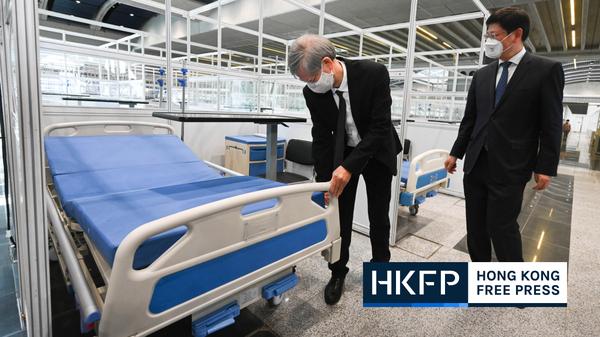 Building security, one bed at a time - The Press

DE PERE – A local nonprofit dedicated to building and delivering beds to children in need is driven by one motto – “No kid sleeps on the floor in our town.”

“Child bedlessness might not be a real word, but it is a real problem,” Dan Vermeulen, Sleep in Heavenly Peace (SHP) local chapter co-president, said. “It’s estimated that 2-3% of the population are kids who don’t have their own bed. That’s about 2,000-3,000 kids in the areas we serve. We all make mistakes in life, but the kids we provide beds for aren’t making the choices to sleep on the floor. In most cases, the parents are doing their best to provide food, clothing and shelter, but sometimes the money just isn’t enough to purchase a bed.”

The local De Pere chapter is part of the national Sleep in Heavenly Peace organization, which has more than 285 chapters nationwide.

After learning about SHP on Facebook and volunteering a few times with the Portage chapter, he said he kept waiting for someone to start a chapter in the Green Bay area.

“I finally realized that I was the one who needed to do it,” Vermeulen said.

Beds are applied for through shpbeds.org.

“It doesn’t have to be a parent applying for a child,” Vermeulen said. “Most of our applications are from referrals, such as social workers, teachers and agencies.

He said bed-building supplies are currently stored in his De Pere garage and house.

“We are searching for a warehouse that would allow us to offer other groups like youth groups, scouts and organizations the chance to build beds, too,” he said.

Vermeulen said bedding is selected based on the age and favorite colors of the child.

“Sometimes, we might just have a single bed to deliver, but we also have had days where we delivered 20 beds in one day,” he said. “Our volunteers assemble the beds (sometimes with the help of the kids) in the room as needed. They can be a single bed or a bunk bed if space is limited.”

Vermeulen said beds are all handmade by local volunteers during “build days,” from lumber purchased with funds raised by the nonprofit.

“Lowe’s and Home Depot have been helping out with discounts for that,” he said.

The mattresses are purchased through various vendors.

Vermeulen said they recently received a donation of 50 mattresses from Steinhafels. 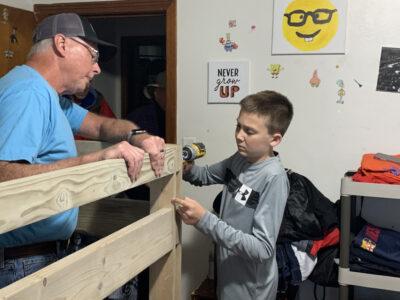 “Other businesses have come forward to help as well, such as Amerilux International, who provides us space to build the beds in their warehouse,” “PCMC has donated bolts and washers for 1,000 beds. Maki Sign donated lettering for our trailer, which was also donated. All of our bedding has been donated. Churches in Green Bay, De Pere, Seymour, Marinette and Kewaunee have all provided quilts. Blankets, sheets and pillows are constantly being dropped off by school groups and many individual donors. We even have people who sew fun pillowcases for the kids to pick from to personalize their own bed. It’s amazing how people just want to do something to help make a difference in the life of a child.”

Vermeulen said each person that participates in the builds has a small task to perform, which streamlines the process.

“We start by cutting the raw lumber into various length pieces,” he said. “Then a group of about 20-25 people sand each piece until they are smooth and splinter free. Next the boards are marked at our tap station, and then it’s off to the drill press station where holes are made for the bolts that will eventually hold the bed together.”

Vermeulen said after that, they go to the assembly area where the pieces are placed in a jig to align everything before being screwed together to create the bed’s headboard and footboard.

“They pass through final inspection and then our SHP logo is applied with a hot branding iron,” he said. “Meanwhile, in a second line, the side rails are cut, sanded, drilled and assembled. Then everything is dipped into a mixture of vinegar and steel wool to give it a slightly stained color and to sanitize the wood.”

Vermeulen said volunteers range in age from 12 to 90.

“We’ve had seven of those build days, and had more than 450 people participate so far,” he said. “The biggest build we did last year was 89 beds in four hours, and we had 111 volunteers helping. Normally, we have about 70-80 people and build about 50-60 beds.

Vermeulen said beds are then delivered and set up for kids in the area.

He said each bed comes with a new mattress, sheet set, a homemade quilt or blanket and a pillow.

“Of those 300 beds, we have had 60 different people help with deliveries,” Vermeulen said. “Every child deserves to have a place to lay their head at night that is warm, soft and promotes a good night’s sleep.”

He said he enjoys giving back to the community and supporting SHP’s mission.

“I’ve also found that people just want to help others,” Vermeulen said.“We provide them a way to do that, and hopefully have fun at the same time.”

Vermeulen said the only qualifications to receive a bed are the child must be between the age of 3-17, not have their own bed (for example, sleeping on a couch, air mattress, sharing a bed with a sibling or parent or sleeping on the floor) and live in one of the zip codes the local chapter serves.

“All our beds are twin size and can be set up as a single or a bunk bed,” he said. “I always say ‘Every bed has a story.’ Sometimes, it’s our dusty, sweaty volunteers who want to know, ‘when we can build again?’ Other times, it’s the parent who might have just moved into an apartment after being homeless, or leaving a bad relationship. You can see the pain and the joy knowing that their child now has a bed of their own.”

Then, Vermeulen said, there are the kids, themselves.

“I always thought every child had a bed to sleep in at night,” he said. “But we’ve delivered to a 12 -year-old who never had her own bed before. We’ve seen a pile of clothes in the corner that they slept on the night before. The air mattress that goes flat in the middle of the night can’t provide a good night sleep. Something as simple as a bed and a small amount of time to deliver it can change the life of a child forever.”

The De Pere chapter of Sleep in Heavenly Peace was recently awarded a $25,000 grant from the William Harrison Family Fund of the Greater Green Bay Community Foundation to put toward the build of 100 beds, which will allow the nonprofit to reach its goal of 400-500 beds this year.

“Someone who attends the church I belong to really liked what we’ve been doing for the past year,” Vermeulen said. “They were able to request a grant from the family fund, which was left by William Harrison, for our chapter.”