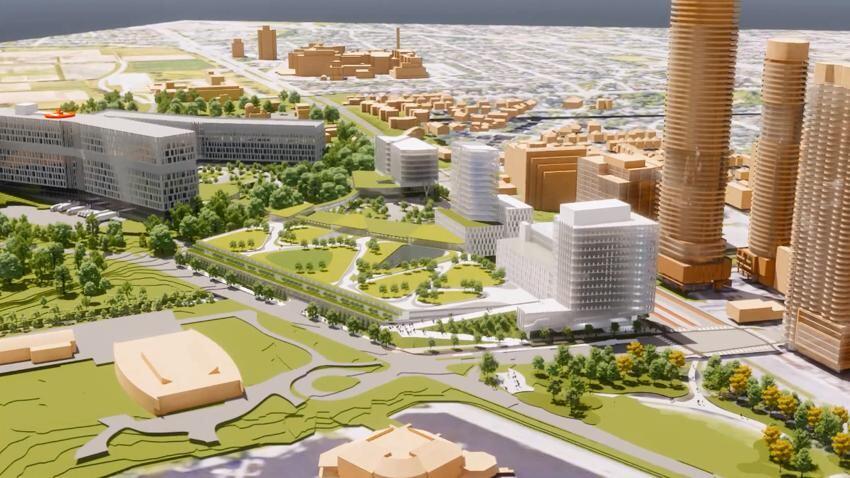 Residents tried one more time to pause the development of a massive parking garage structure in the middle of Dow’s Lake that will be the new home for the Ottawa Hospital Civic Campus.

During a marathon meeting with the planning committee, 36 speakers shared their concerns and opinions over the site plan for a parking garage that will be part of the Civic Hospital’s $2.8-billion expansion.

Paul Saurette is with the Dow’s Lake Residents’ Association and spoke at the meeting. He says the approval of the garage is a major step because it cements the rest of the plan for the new hospital site.

"It locks into place all the major designs for the entire site, means the hospital building has to go where it does, the access roads go where they do, and the parking garage remains where it plans to be, will all of the multiple problems with this design," said Saurette.

The city's planning committee voted 8 to 2 early Thursday evening to approve the site plan submission for the new parking garage. The four-storey building will include 2,500 parking spaces as well as a roof top garden.

Earlier this year, Council approved the master site plan for the new Civic Campus of the Ottawa Hospital, which is set to open in 2028.

The $2.8-billion, 50-acre hospital will be situated on federal land between Dow’s Lake and the Central Experimental Farm. The planned site area features 44 per cent buildings and hardscape, 22 per cent buildings with green roof and 34 per cent green space and landscaping.

Saurette says residents feel the plan was rushed, and does not consider major issues like traffic, accessibility, and overflow parking going into neighbourhoods.

"We need to take the time and do it right, and they haven’t. It is a slow-motion disaster taking place before our eyes," said Saurette.

Monica Olney says many have voiced their concerns over the distance between the LRT station just off Preston Street and the main entrance to the hospital does not consider accessibility. The distance is roughly 500 meters.

"Five football fields is ridiculous distance…It is not appropriate for persons with disabilities, persons that use walkers or chairs, it is just way to long of distance," said Olney.

Olney says the parking garage needs to be better designed, including where it is placed in relation to the hospital and public transit.

"It should be state of the art in every respect, and I think we need to go back into the drawing board."

The Ottawa Hospital says the Civic Hospital needs a new site immediately and does not want to delay development.

"We need this new hospital more than ever. A hundred years is a long time in the life of a hospital, and while the civic has served as well it is time to build a modern facility that will continue to benefit people across our region," said Read.

Read says the site plan took years to do and involved extensive consultation.

"(The Ottawa Hospital) consulted extensively with health care partners across the region, as well as staff members, stakeholders, indigenous communities and the public at large."

The current site of the Civic Hospital was built in the 1920s and needs massive and expensive renovations. The parking garage is the first step in the new site.

Construction of the new campus is expected to start in 2024. The $2.8 billion project is scheduled to be ready in 2028.