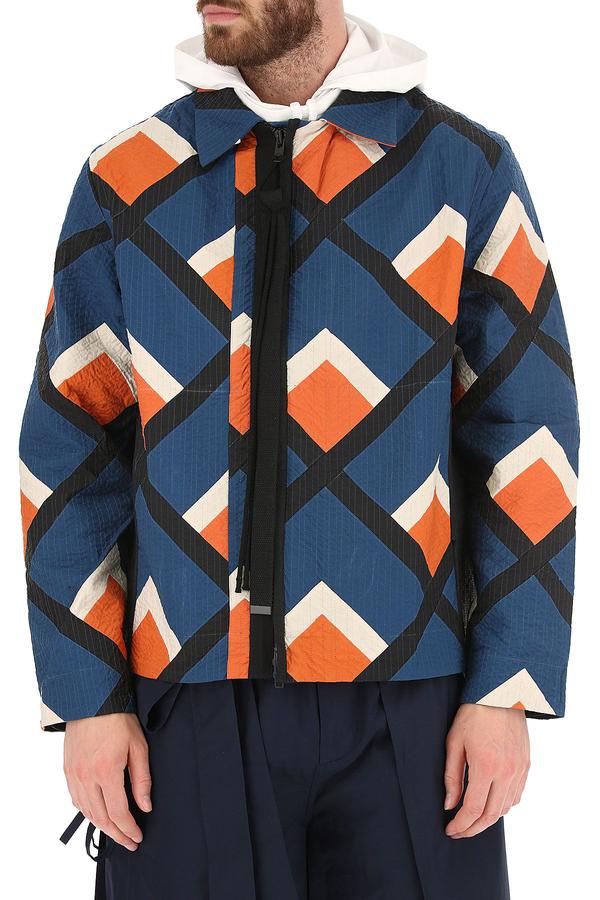 Emerging from confinement at long last, Craig Green’s first physical show since January 2020 trouped through a vast semi-derelict warehouse on the far eastern fringes of London. The content of it plumbed the meanings Green attaches to some of those words: physicality, the claustrophobia of lockdowns, and the weird psycho-tactile friction between inward sensations and outward appearance that manifest in clothing.

“I guess it was about kind of feeling things again, being able to experience things in reality and touch things—and I guess kind of for comfort, but also for suffocation.” Well, Green-land is a landscape where fashion audiences know that complex and alarming symbolisms lurk behind collections that navigate between concept and distinctive, wearable fashion. With its inflatables, multiple textures, and rafts of accessories doused in Green’s extraordinary sense of color, this collection was an extensive spectacular.

It started, he said, when he confronted a mohair sweater. Its fibrous hairiness surfaced feelings of pleasure and repulsion and his questioning of what’s for the wearer, and what’s for others to see. “You know, when people wear fluffy things on the outside, it’s like they’re not experiencing the actual material. So is it like they’re trying to make themselves feel more fluffy to other people rather than experiencing the material?” It led him to insert woolly, tufted outcrops on jackets and what looked like hip-wraps—and continue the idea by lining sweatshirts with the stuff.

The inside/outside dichotomy might well stand in for the whole experience of the last two years, but Green also translated it into the reversibility and transformability of garments. Some of them—like a gray-green cagoule-like jacket and trousers with green moss-like tufts can be unzippered and rolled up into bag-form.

But then: why the inflatables? “We found an image of a man living in an iron lung,” replied Green. That, too— consciously or unconsciously—might throw us back on pandemic-related trauma; the idea of being helped to breathe medically, but also physically confined. Medical equipment has always been one of Green’s fields of curiosity (his mother is a nurse). With this one, though, it had a whole other fetishitic tangent. “I guess it’s like pleasure and suffocation, in a nice way. I guess that kind of crosses over into a sexual thing, as well. Because sometimes you don’t like to share with people what you actually like.”