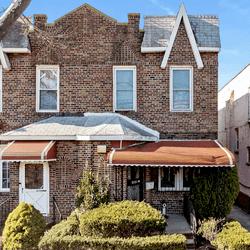 For the buyer who can see the potential in this estate-condition brick Tudor, a thoughtful renovation could give it some necessary upgrades while maintaining the innate 1930s charm. There are some historic details in place along with a generously sized kitchen, a bathroom per floor and a garage.

Dating to 1931, the single-family at 1412 East 46th Street in Flatlands is one of a number of tapestry brick houses built in Flatlands by the Cameo Construction Company. Architect Isaac Kallich designed rows of dwellings for the firm on East 45th and Eat 49th Street and a certificate of occupancy identifies him as the architect behind this East 46th Street row. Trained in Odessa, Russia, and at New York University, Kallich pops up frequently in the early 20th century as the architect behind single-family homes and apartment houses in Brooklyn. Here, as elsewhere, he gave the house some touches of the Tudor Revival style that was popular at the time. While an aluminum awning obstructs some of the exterior details, a comparison to the historic tax photo shows them mostly intact including the entrance bay.

On the interior, the original layout seems intact as well with living, dining, kitchen and a powder room on the first level and three bedrooms and a full bath above. The basement has room for a rec room or office and has another half bath along with a shower in a separate room.

The semi-detached house has light coming from windows on three exposures. It hasn’t changed hands since the 1970s and the listing notes it is “ready for an update.”

Save this listing on Brownstoner Real Estate to get price, availability and open house updates as they happen >>

The wood floors need some attention but they do stretch throughout the house, starting in the living room. The living room also has what may be a signature mantel for Kallich houses, as one with identical Classically-inspired details appears in another of his Flatlands houses. The wall of mirrors is not an original feature and may require a bit of work to remove.

No mirrors in the dining room but there is a picture rail, a wide doorway with a pointed arch, and the original stair with a landing that also provides secondary access to the kitchen.

That kitchen has windows on two exposures and finishes that are more 1970s than Deco in style but do appear in decent repair. With a nice amount of space with which to work, a sympathetic reno could substantially upgrade the space with some modern amenities and perhaps bring back some charm.

Upstairs the front and rear bedrooms also have two exposures, along with wall moldings, picture rails and closets. They, and the more petite third bedroom, share a full bath that still has its Deco-era green wall tile mostly intact, including in the arched tub surround and the built-in shower. The tile along one wall has been painted a neon green and the dual vanity is a replacement. It’s possible this bath also once had a tiled ceiling, like a more intact bath in another Kallich home.

The photos don’t include views of the basement but the listing describes it as a finished space with a high ceiling, laundry area and room for a rec room or office. While the floor plan indicates a bedroom area, it doesn’t appear to be legal living space. A door at the rear provides access to the concrete paved yard and garage. The garage is reached via a shared driveway.

Charles A. Olson of Keller Williams has the listing and it is priced at $725,000. Worth the ask? 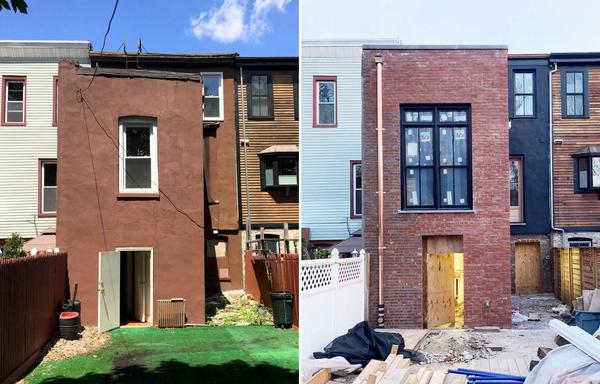 Brooklyn in Your Inbox

Subscribe to Brownstoner’s newsletter and stay up to date with more great news and articles like this one. * indicates required