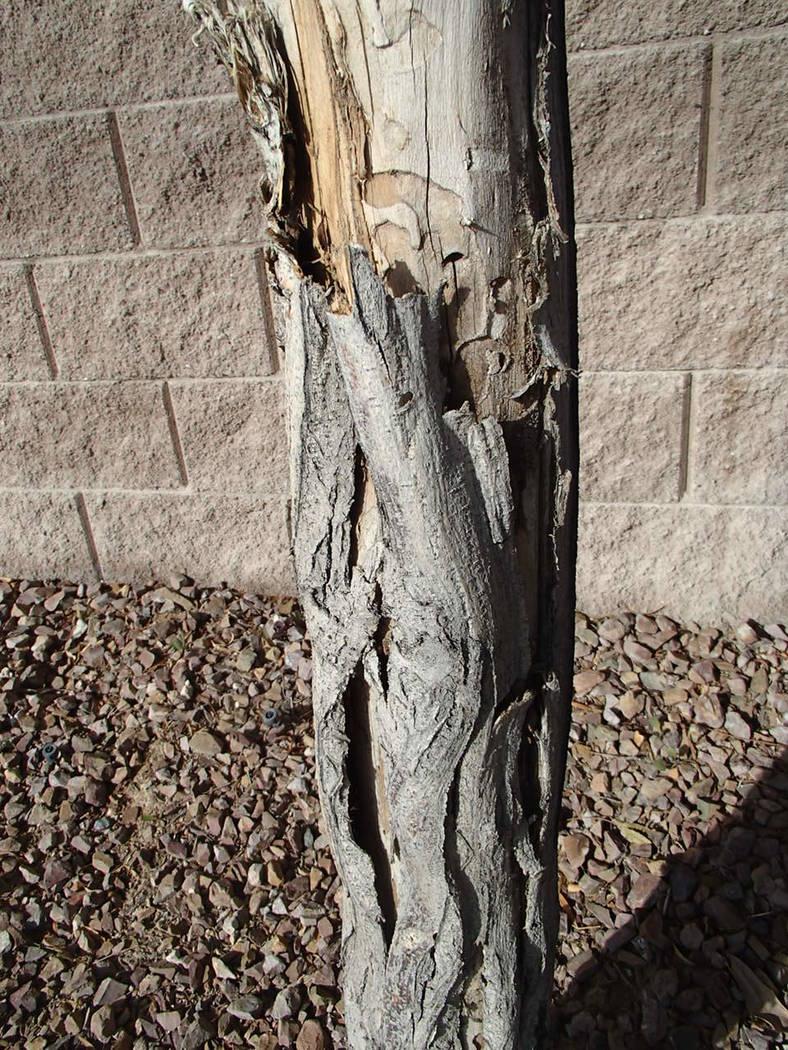 Borers will attack the upper surfaces of fruit trees like peach and nectarine that are exposed to direct sunlight. (Bob Morris)

After the very early morning rain we had on Jan. 18 and nighttime air temperatures near 45 degrees, I saw wet, brown ooze from the exposed upper branches of a sunburned peach tree the next day. The ooze was a dead giveaway because it was a combination of small wood pieces along with sap from the active feeding of borers. The sun-exposed upper surfaces of the scaffold limbs of the open center pruning job were also suspect.

Yes, borers are actively feeding even when the nighttime air temperature is only 45 degrees or thereabouts. That’s because the peach tree is in full sunlight and, with leaves gone, is much warmer than 45 degrees.

As I have mentioned before, right after a rain is a good time to look for borers feeding in the moist cambium of fruit trees. It’s a good time to get out a sharp knife, sanitize and sharpen it, and remove these borers before they cause more damage. They will be found just under the bark in living wood exposed to full sun near the damaged areas.

If rain is absent, a good substitute can be a hose and sprayer wetting the upper surfaces of exposed limbs. A couple of applications of water anytime borers are active can produce the same results.

Another important winter operation is the application of dormant oil to trees and major shrubs. Dormant oil (not Neem) is a petroleum or paraffin-based oil diluted with water and sprayed on trees and shrubs for suffocating overwintering soft-bodied insects.

The insects it works best on include aphids scale, and whiteflies. Spray the leafless trees from top to bottom soon after pruning. I like to thoroughly spray the lowest part of the trunk and the soil where it enters the ground as well. Pick a warm winter day without wind to make the application.

Dormant oil is a hard sell because the benefits are not seen, when compared to previous years, until early to mid-summer. But the benefits can be remarkable.

Remember, to get good aphid control requires good ant control early in the summer as well. This can be done with the appropriate application of ant bait.

Q: The agave snout-nosed weevil grubs killed two of my Color Guard yuccas. There were 15 to 20 hibernating when replacing the Color Guard. Bioadvanced and Bonide said the Imidacloprid systemic insecticide needs the plant to be actively growing to work. Since it’s winter and the insects and plants are hibernating, are the plants doomed?

A: No. Let me explain. The agave weevil becomes more active as temperatures get warmer. But plants warm up sooner than soils.

Since these sisal weevils are inside the plant and the plants in contact with the soil, they can feed during warm winter days and slow down during the colder nights. Imidacloprid probably gives good control if applied soon after growth starts (February or March). In the past, we would use the nonsystemic Diazinon or Dursban crystals and watered them into the soil in March and early April and repeated the application if needed.

Preventive control is the only thing that gives any annual benefits so plan on soil drenching these plants every year. The hardest hit among agave seem to be the American types but other wide-leaved agave and even some yucca, as you have found, have been hit by them as well.

Drench around them with this product as soon as growth starts and use the labeled amount. If you can wait a couple of months, then make the soil drench application after flowering is finished or else cut off the flower stalks early.

Applications of this product after flowering helps minimize any effects to honeybees and the suspected colony collapse disease that has been implicated. Imidacloprid lasts 12 months so one early application per year should be enough.

Q: I purchased a white sapote and was wondering what I need to know to make it flourish. It was about 30 inches tall, neglected, and I planted it on the north side of my house. Since planting in late August, it grew a new flush and looks much healthier. This winter it experienced 25-degree temperatures in my backyard, and it only had some leaf burn on a few leaves. I also purchased a Suebelle variety in a pot, and it had no ill effects from the cold.

A: That’s interesting and good to hear. When I lived here during the 1980s, we had temperatures low enough to freeze water in exposed pipes full of pressurized water. During those days, it was a common practice to wrap exposed water pipes to keep them from freezing until they thawed later in the day. Temperatures back then regularly got down into the upper teens during January. 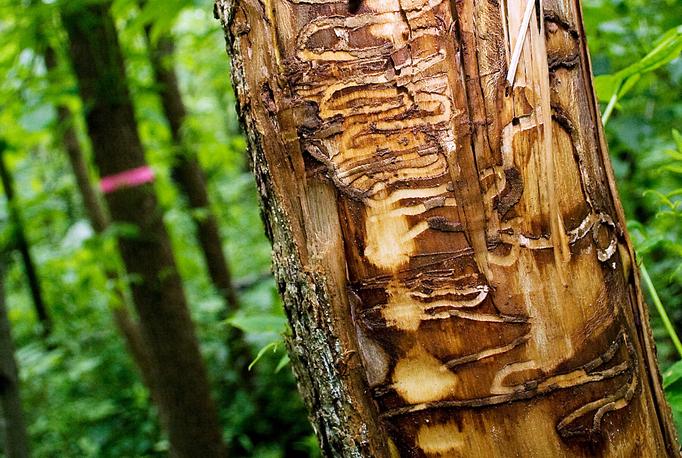 Not just the low temperature is important to note but also for how long it stays there and whether there was wind involved or not. We had a warming trend over the past few years with temperatures in some parts of the valley never freezing.

As these trees get older, their low-temperature tolerance improves a few degrees mostly because of size. To be on the safe side, I would not plant rely on cold tender fruit trees as 25-year keepers.

White sapote is native to central Mexico with the common name of Mexican apple. It is in the same family as citrus and can be compared to Meyer Improved lemon as far as its cold tolerance goes.

The east side of your home is the safest bet on where to plant it. Remember it is subtropical, so it needs to be planted with soil amended with compost and covered in woodchips rather than rock.

Q: I was wondering if you could cover permaculture gardens? I am interested in making a garden with edible food that requires little maintenance but can survive our climate. Could you point me to where such a publication exists or any advice you may have regarding this topic?

A: I don’t know of any single publication that exists on permaculture for our desert area. I believe there are some local enthusiasts who have posted advice on blogs or may have started a Facebook page.

Permaculture, in my opinion, is a combination of agriculture or horticulture plus experience that has been validated by science. Oftentimes what we learn from applied science is practical experience that’s been proven using a scientific method. Permaculture ignores the traditional row crops of agriculture and horticulture and favors plants growing together in a mixture instead.

There is a lot of inaccurate or misleading information online. Finding some specifically for the desert is even more difficult.

Some people recently have been advocating the growing of subtropical trees over the long term because of recent climate changes. We will see if that’s the case or not but I’m a believer in cycles and I think we will get back to freezing temperatures again. We will see who’s right.

A lot of what you’re missing is experiential. For example, what happens when crops are instead grown in mixtures rather than rows, proper soil fertility for mixtures of plants, reliable so-called “companion planting” techniques, push/pull strategies for controlling pests, plants growing in the desert best suited for specific exposures of sun and wind, etc. There is a lot of missing information that you will need specifically suited to desert regions.

Wind has a big impact on agriculture. Build a wind barrier to protect low-growing plants that require little to no extra water.

The best windbreaks allow about 20 percent of the wind through them. In my opinion, a chain-link fence with PVC slats installed gives you roughly about an 80/20 percent wind barrier and uses very little to no water.

Wind barriers affect air movement of smaller plants like vegetables and herbs downstream of the barrier five times its height. So, if something is 5 feet tall, it slows air movement about 25 feet. A poor choice in a wind barrier is a so-called “living wind barrier” that requires water or could die.

Temperature regimes are still important and their modification, when feasible, unless we learn differently. I would still recommend fruit trees that have a winter cold hardiness tolerance between 20 and 25 degrees to be permanent producers as well as keeping track of hyper-local temperature information with two or more backyard maximum/minimum thermometers.

Other key factors when producing in the desert include water management and soil fertility as we expand our plant lists beyond desert plants. Probably our biggest hindrance is our cost of agricultural water.

Bob Morris is a horticulture expert and professor emeritus of the University of Nevada, Las Vegas. Visit his blog at xtremehorticulture.blogspot.com. Send questions to Extremehort@aol.com.