If you want a living, blooming fence around your garden, try this drought-tolerant plant 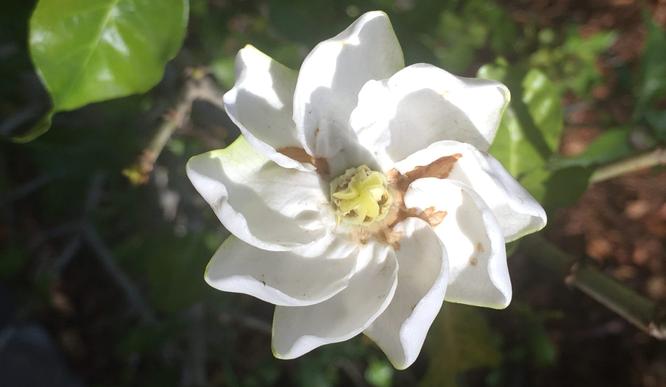 If you want a living, blooming fence around your garden, try this drought-tolerant plant

If you want to plant a living fence, as impenetrable as barbed wire, consider a gardenia.

Not just any gardenia, mind you, but a species native to South Africa that is as drought-tolerant as the toughest California native once it is established in the earth. South Africa’s climate is much like our own – a long, hot growing season followed (if we’re lucky) by a rainy season — so that plants native to that country will be as drought tolerant as those native to California.

The plant to which I refer is forest gardenia (Gardenia thunbergia).

Around 20 years ago, before the Sherman Oaks Library was demolished and rebuilt, there was a stunning hedge, around eight feet tall, of this species. It was situated along the edge of a northwest-facing wall so that it received good light but no direct sun. I was mesmerized by the highly fragrant trumpet blooms that end in swirling, starry pinwheels. These flowers open over a period that will extend through the next few months.

I should mention that this gardenia does not flower until the plant is around six feet tall. Where flowering is concerned, the most vital criterion for determining when any species will bloom is size. Each species of plant must reach a certain height before it flowers. You may not be aware, for instance, that common English ivy is a flowering plant. When grown as a ground cover, it only shows foliage but, where it clambers up a tree, signpost, or telephone pole, it will eventually begin to flower. These flowers are not at all glamorous, just yellow-green lollipops. Ivy is the classic case of a plant that can be kept in a juvenile, non-flowering state for years and years, perhaps for its entire life. It will only become a flowering adult, capable of sexual reproduction, when we allow it to grow up vertically.

I came by way of this seldom-seen gardenia without any effort on my part. I had purchased a commonly seen Gardenia jasminoides var. Mystery that, due to its tendency towards iron deficiency chlorosis or leaf yellowing, had been grafted onto a forest gardenia rootstock at the nursery. This rootstock does a better job of extracting iron from the soil than the ‘Mystery’ variety manages to do when grown on its own roots. All was well and good until the more vigorous forest gardenia rootstock outgrew the ‘Mystery’ scion that was grafted upon it. This is not a phenomenon foreign to any veteran rose grower. Every now and then, you may spot a wine-red rose suddenly appear in your rose garden where none was planted. In old abandoned gardens, all you may see are wine-red roses. The reason for this is that nearly all hybrid roses – meaning virtually all of those you see at the nursery — are grafted onto a Dr. Huey rose rootstock. Dr. Huey imparts enormous vigor to hybrid roses; the downside is Dr. Huey’s suckering proclivity. If any of these suckers are allowed to reach a certain size, they will bloom. Typically, when hybrid roses begin to lose their vigor, Dr. Huey takes over.

This phenomenon is also common on citrus trees, all of which are grafted and whose rootstocks yield fruit that is invariably bitter. If you see oranges on your orange tree that look different from the variety you are accustomed to picking and are sour to the taste, they are coming from the rootstock below. If you see strange-looking lemons on your lemon tree, they are rootstock lemons.

Getting back to my forest gardenia, its impenetrability has nothing to do with thorns but rather with its leaf and flower buds that come to sharp points. Its wood is extremely tough with little if any bend in its branches. The flowers become fruits that look something like kiwis and remain on the plant for several years, adding ornamental interest. 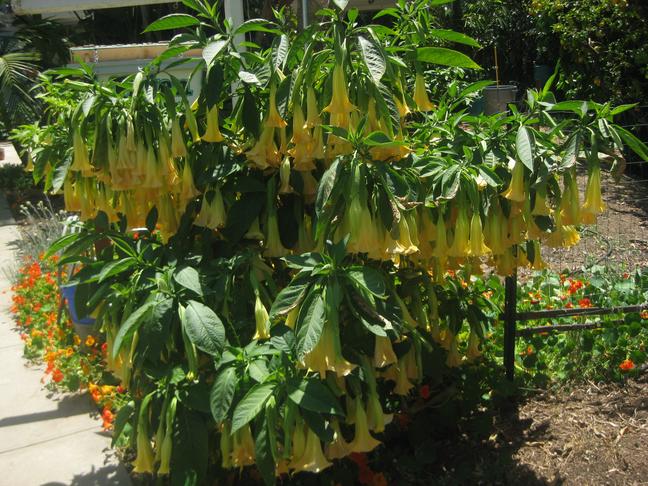 I searched high and low for a nursery that grows forest gardenia but, alas, none could be found until I came upon a nursery in Hawaii that grows it. As the website of Vintage Green Farms (tom-piergrossi.squarespace.com) writes, “The plant does not bloom when young, probably why it is not seen for sale more.” By the same token, “The older the plant, the longer the bloom season, extending perhaps up to six months.” It’s described as “A very un-gardenia gardenia. It’s easy to grow, not picky about soil, and produces hundreds of large fragrant blooms. This gardenia grows to ten feet or more, the wood is very angular and light-colored, which contrasts beautifully with the dark green foliage. The foliage is crinkled when young, larger and more open with age. The root system is better at nutrient uptake than other gardenias.”

You may think that shipping plants from Hawaii is expensive but it’s not. As the website explains: “Because we are so isolated on the Big Island of Hawaii, we import almost everything, but that also means that the FedEx planes leave with a lot less stuff than they arrived with and, because of this, the Hawaii Shippers Association was able to negotiate a great deal. That means that I can ship at better rates than anyone on the mainland. FedEx is also quick, the plants usually take about 2-3 days, and have tracking numbers available.”

I highly recommend scrolling through the exotic botanical fare offered by Vintage Green Farms. If you have any questions about the beauties you see, you can call Tom, the owner, on his cell phone (760-525-9426) and, based on my experience, he will answer in person and gladly share his vast knowledge with you. And, by the way, he has no minimum order.

Among the plants especially promoted by Vintage Green Farms are Brugmansias, commonly known as angel’s trumpets. Members of the nightshade family, Brugmansias are highly toxic, yet their gigantic, pendulous, flared flowers, reaching up to ten inches in length and sitting cheek by jowl on certain varieties, make you want to grow them anyway. Of the nine varieties offered at the Hawaiian nursery, five are currently sold out and regarding the ‘Double White’ – its flowers consist of one trumpet nested in another – “only two are available.” San Marcos Growers (smgrowers.com), however, has eleven angel trumpet varieties available through its retail outlets, including ‘Double White.’

Brugmansias are fragrant, especially at night, when they attract pollinating moths. The hawkmoth — which, in its larval or caterpillar form is known as the tomato hornworm — has a long proboscis that is especially well-suited to harvesting nectar found at the base of Brugmansia’s deep flowers. Be advised that Brugmansia seeds and leaves are potentially fatal when swallowed in excess.

Tip of the Week: Beth Cann, who gardens in Menifee, emailed as follows: “I am looking for a low-growing perennial that is VERY heat tolerant. We have had several weeks this year when it has been 100 degrees plus for a week at a time. I would really like individual plants, not a ground cover.” There is lantana, as heat resistant as any plant, in all sorts of sizes and colors. Some lantana varieties tend to trail or spread out but some are easily controlled through pruning. I am partial to ‘Confetti,’ a bush lantana several feet tall with multi-colored flowers in yellow, orange, and pink. And there are also Myoporums, although most types are ground covers, which I have seen growing along the edges of the Dead Sea — one of the hottest places on earth.

Have you considered succulents? They come in every color with sculptural shapes. Many grow in full sun and barely need water. If you like red, you might want to consider dwarf crown of thorns (Euphorbia millii ‘Dwarf Apache’). For orange, select Sedum nussbaumianum. There are multi-colored succulents such as Aeonium ‘Sunset’ (pink, yellow and green) and paddle plant (Kalanchoe luciae), whose curvaceous foliage is blue and green with bronze eges. Blue chalk sticks (Senecio serpens) is a pure baby blue addition to the succulent garden.

A mature rosemary (Rosmarinus officinalis) bush can take as much heat and as little water as most cacti. Rosemary ‘Lockwood de Forest’ has deep blue flowers and a mounding growth habit. There is also a bush bougainvillea known as ‘Raspberry Ice’ that you might wish to consider. Its foliage is variegated green and cream and its bracts are raspberry pink.