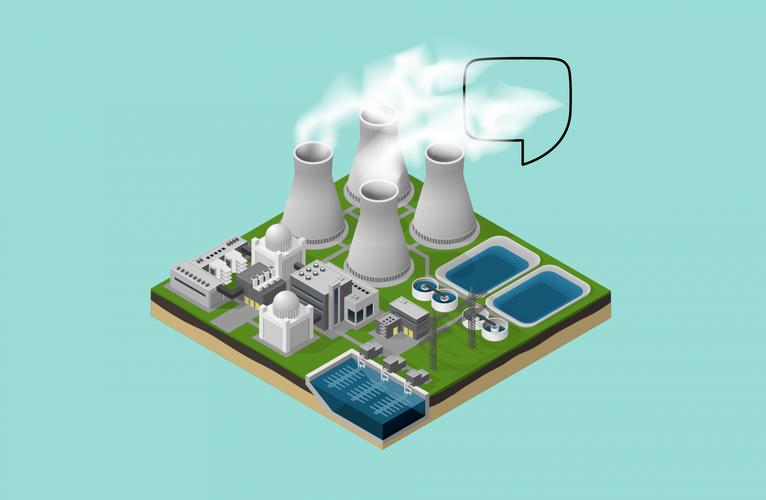 IRELAND IS SPLIT down the middle on whether to start splitting atoms – that is, whether the country should build a nuclear power station to help move away from fossil fuels.

The highest support for introducing nuclear power is among 18 to 24-year-olds, while 45 to 54-year-olds are more hesitant about the idea.

A poll by The Good Information Project/Ireland Thinks asked a representative sample of 1,200 people the question: “Should Ireland build a nuclear power station to increase clean energy supplies?”

Younger people from age 18 to 24 were the most interested in developing nuclear power with 60% saying yes, compared to a low of only 36% support among 45 to 54-year-olds.

The most up-to-date climate science is clear that the world needs to significantly reduce greenhouse gas emissions and a major factor is removing dependence on fossil fuels.

Some experts suggest nuclear power as an alternative energy source and say that it is safe to use, although some concerns still exist among the public from past disasters such as Chernobyl in 1986.

But it’s an energy source that other countries are developing. The UK government is expected to soon invest £1.7bn into a large-scale nuclear reactor in Suffolk, according to the Guardian.

Voters for Fianna Fáil, Sinn Féin, Social Democrats, Independent and Aontú leaned more towards being in favour of nuclear power in Ireland than against it, but the highest level of support did not surpass 57%.

There was a high level of uncertainty compared to other questions in the Ireland Thinks poll, with 30% of Labour Party voters saying they didn’t know and between 10 and 20% uncertainty among voters from most other parties.

An issue that was almost as divisive was the question of cars – specifically, whether the sale of petrol and diesel vehicles should be banned in the next fifteen years.

The Department of Transport has set its sights on having 936,000 electric vehicles active in Ireland by 2030.

The European Union wants to see all member states, including Ireland, ban the sale of petrol and diesel vehicles by 2035.

The proportion of people who approve of the idea steadily decreases with age – four out of five 18 to 24-year-olds would give it the green light whereas only two in five of people aged 65 and over would do the same.

Support was much higher among those with a third-level degree (64%) compared to those who finished education with their Leaving Certificate (43%) or before it (38%).

Although the population at large is split on the issue, Green Party voters are resoundingly in favour – 99% think Ireland should end the sale of petrol and diesel vehicles by 2035.

The next highest level of support was among People Before Profit voters at 78%, Social Democrats at 66% and the Labour Party at 63%.

On a scale of one to five, we asked people about their priorities in a trade-off between economic growth and tackling climate change, one meaning they would focus on growth and five on climate.

The most common answer was to balance the two, with 37% of respondents placing themself at a three.

The results indicate that young people in particular care more about tackling climate change than the economy – no 18 to 24-year-olds rated themselves as a one. 16% were a two, 28% were three, 30% were four and 26% were five.

That means nearly three times as many young adults are more concerned about climate than those who would focus on economic growth.

But that attitude isn’t confined to young people. In every age category (albeit with smaller margins), fours and fives were more common than ones and twos, except for 45 to 54-year-olds, who are slightly more focused on the economy – 29% were ones and twos and 28% were fours and fives.

Only supporters of Fianna Fáil, Independents and Aontú were more likely to prioritise economic growth, while Green Party, People Before Profit, Social Democrats, the Labour Party and Fine Gael voters leaned towards tackling the climate crisis.

Ireland Thinks polled a representative sample of 1,200 people on 16 October for their views on climate issues – you can find out about what Ireland thinks of climate responsibility, agriculture, and whether the government is doing enough on Saturday.

This work is co-funded by Journal Media and a grant programme from the European Parliament. Any opinions or conclusions expressed in this work are the author’s own. The European Parliament has no involvement in nor responsibility for the editorial content published by the project. For more information, see here.