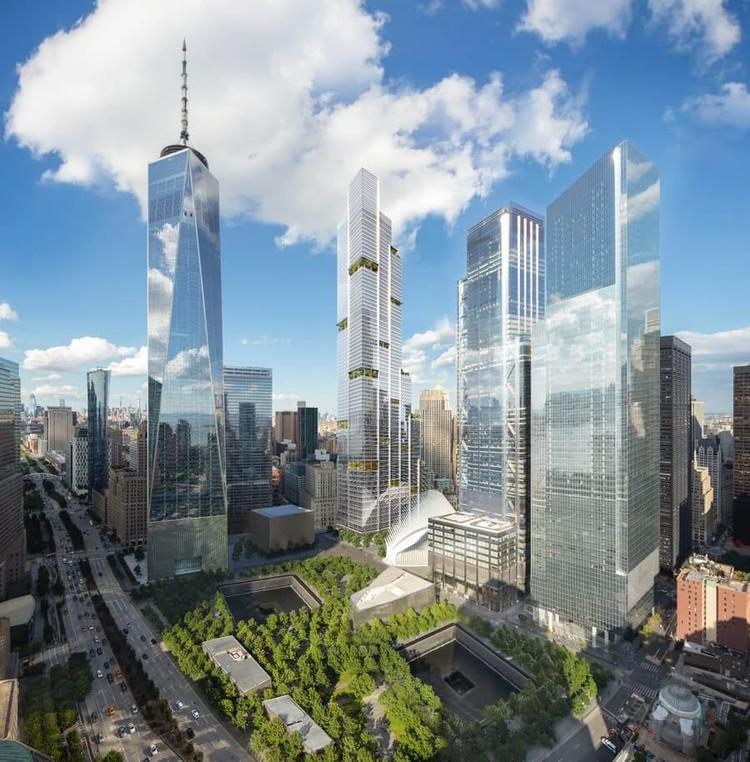 Is the third time truly the charm for Two World Trade Center? New renderings spotted by New York YIMBY on February 1 seem to reveal the long-delayed tower’s new look, a marked departure from what was first unveiled by Foster + Partners back in 2005.

That’s not too much of a surprise. Although Foster + Partners was awarded the project 17 years ago and the foundation was laid in 2013, work has been proceeding at a slow clip and the original team was replaced by BIG in 2015 after developer Silverstein Properties decided to take a more contemporary approach and position the tower as the future home of Rupert Murdoch’s News Corporation and 21st Century Fox.

Gone was Foster + Partners’ plans for a slender 88-story office tower that terminated in four sloping diamonds intended to draw the eye downward toward the 9/11 Memorial. In its place, BIG designed a set of six boxy volumes that would rise and rotate from a podium up to 80 stories, with the underside of each segment featuring scrolling news and stock tickers. However, News Corp. ultimately backed out, and without an anchor tenant (BIG’s design would have also required updates to the extant foundation), Silverstein Properties handed the project back to Norman Foster in January of 2020

At the time, it was a bit unclear whether that meant the old design would come back or something new would be considered; Larry Silverstein said the original proposal would be “significantly modified” to account for current tastes and updated needs. (Even after BIG took over the project, Foster’s diamond design could still be found on official artwork in the subway system and in murals across New York City.)

More definitive answers as to what will be built at 200 Greenwich Street in Manhattan’s Financial District appeared in November, when New York YIMBY posted photos of an architectural model depicting tall, split volumes atop a longer base. Now, the renderings released earlier this month from Visualhouse appear to corroborate that.

For fans of the original proposal, you’re out of luck, as Foster + Partners is apparently planning a staggered bundle of slender volumes with each topped by a green roof. A cascade of terraces will move from the podium up to the peak toward One World Trade Center to the west and top out at about 1,350 feet. Each terrace, from the renderings, will be broken up with plantings, and it looks like each vertical volume will hold intermediary outdoor plazas—a stark contrast from the singular, sculptural structure previously pitched. It’s likely these will be amenity spaces for office occupants and should provide sweeping views of Manhattan on the eastern side and New Jersey to the west.

Speaking of the exterior and specifically the curtain wall, it appears Foster + Partners has opted for mirrored floor-to-ceiling windows banded with thick vertical steel “poles” that will segment each volume and direct the eye upward. As Curbed noted in Christopher Bonanos’s breakdown of the new design, boxy glass towers are more or less typical for the area now, and the vertical banding of 2 WTC’s facade will find similar company in Rogers Stirk Harbour + Partners’ 3 World Trade Center tower on the other side of Fulton Street.

No estimated construction start or opening dates have been made public yet. Once finished, 2 WTC will fill in one of the last empty lots at the World Trade Center complex, capping Studio Libeskind’s 2003 master plan for the 16-acre site alongside the forthcoming Five World Trade Center. AN has reached out to Foster + Partners for more information and will update this article accordingly.

This article was originally published in The Architect's Newspaper.