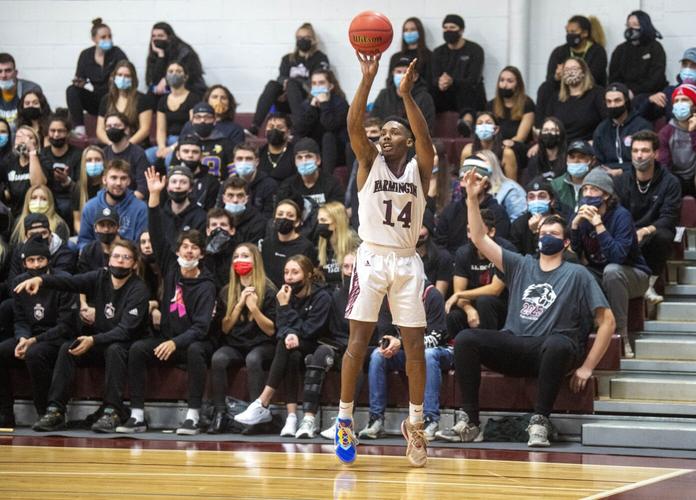 FARMINGTON —Terion Moss has found the right place, starting at point guard for the University of Maine at Farmington men’s basketball team, pursuing a degree in community health, attending a small school where he feels more comfortable. And he’s happy.

It wasn’t always that way for Moss, the Portland High graduate and 2018 Mr. Basketball winner who began his college basketball career at the University of Maine, the state’s lone NCAA Division I program.

“I was just over my head, I think. I should’ve thought about it more,” Moss said of his decision to go to UMaine, which he attended for a year. “I’m just happy to be at Farmington, playing here.”

He’s been flourishing ever since landing at UMaine-Farmington, a Division III school with about 1,600 full-time students.

In his first season with the Beavers in 2019-20, Moss averaged 18.4 points per game and was chosen as North Atlantic Conference Player of the Year. UMF only was able to play three games last winter because of the pandemic, with Moss averaging 16.7 points.

This season, though, Moss has turned it up.

Through UMF’s first five games, in which the lone loss was to UMaine, Moss averaged 32.4 points per game, leading the nation in scoring heading into Saturday’s game against Northern Vermont-Lyndon. His 3-point shooting percentage (56.5 percent) was sixth-best in the nation. In 27 games as a sophomore, Moss made 50 shots from behind the arc – 36.8 percent of his attempts. Going into Saturday’s game, he already had 26 3-pointers.

“I’m starting to let the game come to me, and taking good shots when I’m open,” said Moss, a 5-foot-11 senior. “My teammates are the biggest key to all of this, because every day in practice they keep telling me to shoot whenever I’m in a slump.”

Terion Moss, center, chases down a loose ball during a game against UMaine-Augusta on Wednesday in Farmington. Moss has stepped into the role of a team leader for UMaine-Farmington. Michael G. Seamans/Morning Sentinel

Barely a minute into Wednesday’s game against UMaine-Augusta, Moss took his first shot, a long 3-pointer from the right, elbow extended. Swish, and the Beavers held a six-point lead. Forty-seven seconds later, Moss took his second shot, a 3 from the left. Swish, and UMF’s lead was eight.

“I’ve said it many times, but he’s putting in all the extra time to be prepared for these game days. It’s really just showing. To shoot the ball that consistently is no accident,” said Sam Leal, now in his second season as UMF’s head coach.

“It’s not just a hot streak. We see it every day in practice, him making these shots. The shooting is where he’s getting his extra points. He’s always been able to get to the lane and finish. When he’s shooting such a high percentage from 3, that’s where he’s unguardable.”

Teammate Mark Mayo, a junior reserve center and Lake Region High graduate, said of Moss: “Every day at practice, he does something. He’s very unselfish out there, too. There’s days he’s not on, he gets the ball to the next guy and lets them do their thing,” said Mayo.

Now in his third season at UMF, with a fourth to come thanks to the NCAA’s decision to grant athletes an extra year of eligibility because of the pandemic, Moss is not the same guy who in April 2018 signed a letter of intent for an athletic scholarship at UMaine. He’s more mature, and focused on being a team leader for the Beavers.

As the state’s Mr. Basketball winner and two-time Gatorade Player of the Year, was there pressure to choose a Division I school? Maybe, Moss said. Since the Mr. Basketball Award began in 1988, 15 of the 34 winners – including Moss – played at least one season of Division I college basketball. (Maranacook’s Cash McClure, the 2021 winner, is playing a prep year at Kimball Union Academy and has not made a college decision.)

On the court, Moss had a respectable freshman season with the Black Bears. He made 15 starts in 29 games played, averaging 5.4 points, 2.6 rebounds and 1.8 assists in 27 minutes per game. He showed the promise of a freshman adjusting to a faster game.

Off the court, though, the University of Maine never felt like the right fit to Moss, who cited the size of the school (nearly 12,000 undergraduate and grad students), the rigors of Division I basketball, and some difficulties with the coaching staff that he declined to detail.

Moss came close to transferring to the University of New Haven, a Division II program. Robert Pillsbury, his coach with the Blue Wave basketball club and himself a former Mr. Basketball winner from Portland, told the Press Herald in the summer of 2019 that Moss to New Haven was “a done deal.” Instead, Moss chose UMF, where he could join his older brother, Amir.

“I say it was just personal reasons. I mean, I had some conflict with the coaches (at UMaine), but it’s all settled now. We’re cool. We just played them the first game of the season and I said hi to them,” Moss said. “I just felt coming here, and my brother was here, was a better choice for me, education-wise and basketball-wise.” 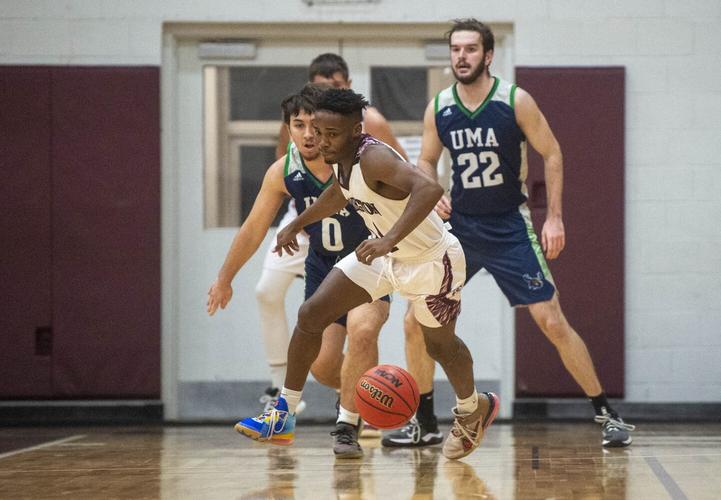 Now in his third season at UMF, it’s obvious Moss made the right choice. Moss said he even learned to appreciate the winters in Farmington, on the edge of Maine’s western mountains.

“Farmington’s a great town. Way colder. I can notice it,” he said. “Sometimes when I go home, when I get back down to Portland, there’s way less snow than there is up here.”

Leal, the Beavers’ head coach, said of Moss: “He’s comfortable here. His friends are terrific. His personality really just fits. It’s just a comfort. It’s a safe place to live, learn and play basketball. I think that’s where he finds his joy.”

That joy translated to embracing a leadership role. Moss and Mayo arrived at UMF at the same time, although Mayo was a freshman who knew Moss only from highlight clips he’d seen. Mayo expected the former Portland High star to be aloof. Instead, Moss made sure to invite his quiet new teammate to join him at the dining commons after practice. Moss is a talker who brings energy to everything, Mayo said.

“More and more we started to hang out, and you realize what a great guy he is,” Mayo said. “I was kind of a shy, quiet kid on the team, and he took me in and made me his friend. I come here, and think, ‘Oh, it’s Terion Moss.’ I didn’t realize that was the kind of guy he was.”

Leal expects Moss to continue to lead the Beavers.

“(His offense is) in the flow with how we play. He’s such an unselfish player, and it doesn’t look like he’s going out of his way to score these points,” Leal said. “It’s just a joy for us to watch. He’s just a terrific teammate.”

Success. Please wait for the page to reload. If the page does not reload within 5 seconds, please refresh the page.

Don't have a Talk profile?

Hi, to comment on stories you must . This profile is in addition to your subscription and website login. Already have one? .

Please check your email to confirm and complete your registration.

Create a commenting profile by providing an email address, password and display name. You will receive an email to complete the registration. Please note the display name will appear on screen when you participate.

Only subscribers are eligible to post comments. Please subscribe or login to participate in the conversation. Here’s why.

Use the form below to reset your password. When you've submitted your account email, we will send an email with a reset code.

Send questions/comments to the editors.