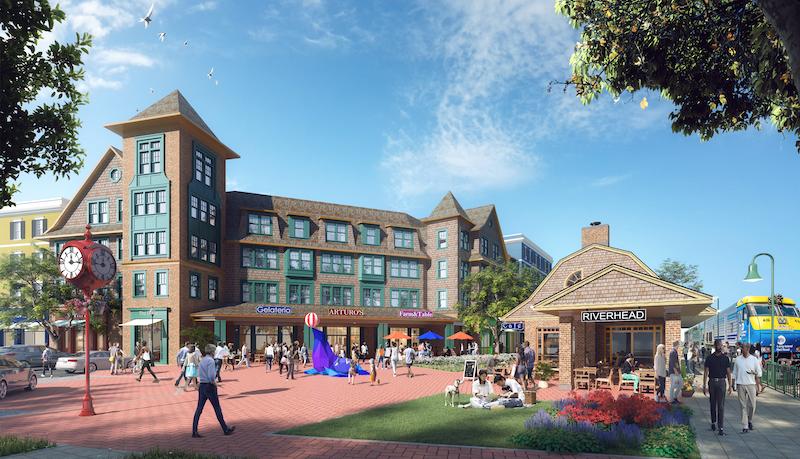 Riverhead officials have chosen a master developer for transit-oriented development whose plan aims to transform the long-blighted train station area into a pedestrian-friendly center with shops and apartments.

The plan proposes a five-story building, featuring 243 apartments above ground-floor parking, amenity and commercial spaces. The building, to be located on the municipal parking lot between Court Street and Railroad Avenue, would also feature an open courtyard space at its center.

A five-story parking garage with six levels of parking is planned for the parking lot at the corner of Griffing and Railroad avenues. The garage would be approximately 130,000-160,000 square feet and provide 420-520 parking spaces. The structure would be set back from Griffing Avenue to allow space for future development of shops along the sidewalk.

RXR and Georgica Green Ventures presented their plan to the town board Thursday after beating out six other finalists in a review of development proposals by a committee appointed by the town board. Riverhead announced it was soliciting proposals for a master developer last March, shortly after expanding development in the area with the adoption of the Railroad Avenue Urban Renewal Area Overlay District and a Transit Oriented Development Plan.

“This committee met many times, reviewed many lengthy and complicated documents and discussed these proposals at length,” Supervisor Yvette Aguiar said. “At the end of this year they conducted their work, and they concluded their work and, after careful consideration, recommended the proposal by RXR and Georgica Green Ventures to the town board.”

Board members intend to pass a resolution at Tuesday’s meeting accepting the committee’s recommendation and designating RXR and Georgica Green Ventures as the master developers of the project, starting the development process.

RXR has developed a number of large projects and properties, most being in or around New York City, including the Beacon condominiums at Garvies Point in Glen Cove. The group was also named master developer of New Rochelle’s downtown revitalization in 2014. They have more than $8.7 billion in equity raised. This would be their first project on the East End.

Georgica Green Ventures, on the other hand, has several projects on the East End, including the Riverview Lofts, a mixed-use development with 116 subsidized apartments located on the riverfront.

The two developers recently partnered on a $32.3 million affordable housing development project at Garvies Point in Glen Cove that broke ground in July.

The proposed building was designed by Torti Gallas + Partners based in Washington, DC. Erik Aulestia, a principal at the group, told the board that the firm has worked on over 100 transit-oriented development projects. He said the mixed-use building will work as a “front door” for people traveling to Riverhead. The north portion of the building, facing the train station, would be four stories tall, while the southportion of the building, facing the Supreme Court building, would be five stories.

The parking garage proposed for the Griffing Avenue lot would be set back to allow for construction of shops on the site, adjacent to the sidewalk. Itwill make the street a more inviting, walkable connection to Main Street, he said.

“It’s about a train experience that’s gracious. It’s about an opportunity for public art in the plaza, improved streetscapes, a plaza space that you can hang out in, architecture that’s appropriate to the culture and to the region, and things for people to do, opportunities for food and beverage,” Aulestia said. 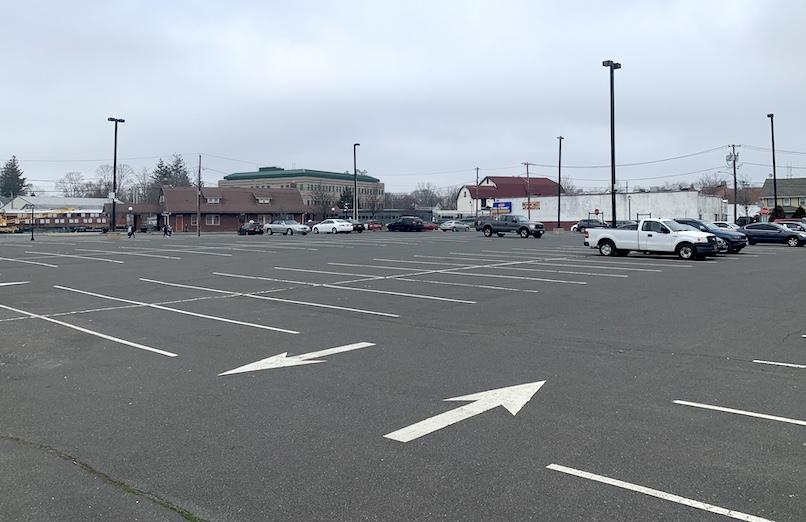 When asked by Councilman Ken Rothwell about the time frame of the project, Joe Graziose, RXRs executive vice president for residential construction and development, said it was difficult to say when it might be completed, because it depends on the timing of approvals.

The parking garage project has a letter of support from Suffolk County, which owns the Griffing Avenue parking lot and uses it as parking for the Supreme Court, Graziose said.

Community Development Administrator Dawn Thomas said the developers would need to obtain a qualified and eligible determination and go through the regular processes for any development in the town.

Councilman Bob Kern asked the group if the zoning was changed, if the building could be made taller. Graziose said he couldn’t give Kern an opinion offhand, but said it was something “we would certainly want to explore” and that the current design was made within the parameters of the current zoning code.

Board members had a positive reaction to the proposal.

“This is part of what I’ve spoken about many times. People speak out against projects like these, I keep reminding them you got to see the big picture,” Councilman Tim Hubbard said. “And the big picture is coming to fruition, with this project, starting the 205 Osborn Avenue project, going back starting to Mr. Gallo’s project that really led to a transformation of downtown Riverhead and is leading to the current transformation of downtown Riverhead.”

“I could see a lot of work was put into this,” Aguiar said. “And I want to commend again, all the volunteers on the committee and RXR for looking at us as a potential site.”

“One of the things we truly believe in at RXR is that we only succeed if the communities we develop in succeed,” said Joanne Minieri, RXR’s senior executive vice president. “And that’s really the underlying mission for us here today. And our team is extremely excited to be a part of this master planning momentum that’s occurring here in Riverhead. And we really do look forward to being a part of the success.”

Riverhead was awarded a $10 million Downtown Revitalization Initiative grant, which town officials plan to spend on multiple projects downtown including the town square and the transit oriented development project. The town’s application for the grant, which was made for pursuing a $20 million award, said the town would spend $4.5 million to offset the cost of construction for a public parking garage near the railroad station.

Another project near the railroad station is G2D Group’s five-story, mixed-use building at 205 Osborn Avenue, at the corner of Court Street, which received preliminary site plan approval from the Town Board last week.

Correction: The article has been amended after initial publication to amend the names of RXR and Torti Gallas + Partners.

The survival of local journalism depends on your support. We are a small family-owned operation. You rely on us to stay informed, and we depend on you to make our work possible. Just a few dollars can help us continue to bring this important service to our community. Support RiverheadLOCAL today.