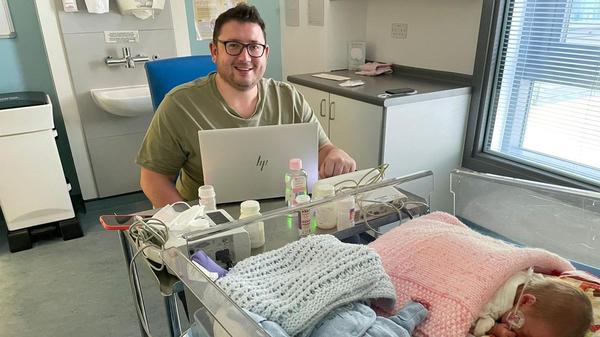 A Scots dad is 'working from home' at the hospital bedside of his premature twin babies.

Gordon Miller welcomed twins Hamish and Blair on October 21 after wife Fiona had to undergo an emergency c-section when she was just 29 weeks pregnant, following a massive bleed.

The couple, who had been trying to get pregnant through IVF for five years, feared they might lose their precious twins and vowed not to leave their bedside at Victoria Hospital in Kirkcaldy, until the day they can take them home to Motherwell.

For Gordon, who is head of digital and IT at Scottish Canals, this meant working from beside his tiny babies' incubators.

The 35-year-old is taking calls, writing reports and conducting interviews, in between nappy changes and feeds.

Gordon went through a contract change back in May, which means he hadn't garnered enough work time to qualify for paternity leave so has set up a 'home office' on the ward.

He said: "I am just trying to juggle it all. It means that I am able to write my reports while keeping an eye on their heart monitor, or I can take a quick call in between feeds and nappy changes.

"Before Covid this would never have been able to happen. I would have had to have done the three hour round trip everyday to and from Motherwell.

"But now the remote working infrastructure is so efficient that it has allowed me to be beside my children when they need me most, but not miss anything important at work."

Gordon and Fiona were thrilled to discover they were expecting a baby earlier this year when medics told them their third and final round of IVF had finally been a success.

But the couple were stunned when scans showed that their last two embryos had implanted and they were expecting twins. 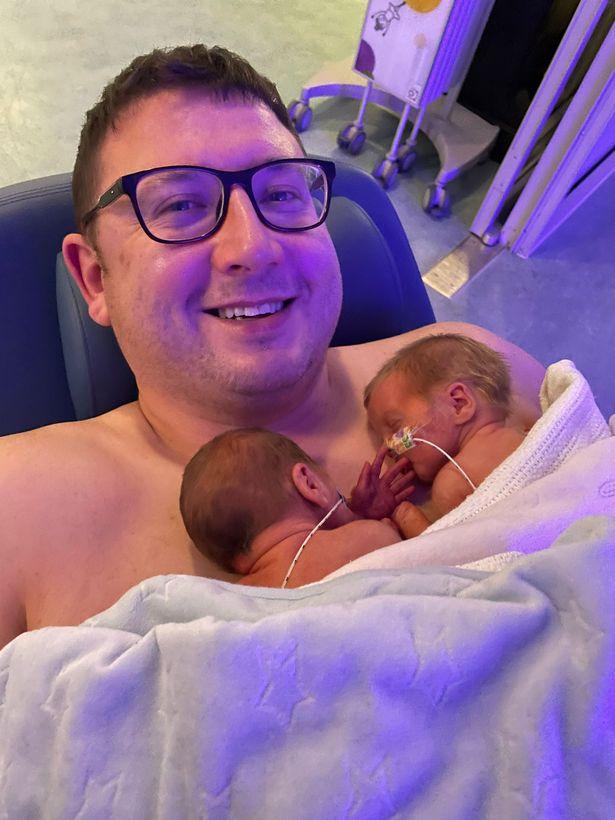 Their joy turned to worry however when at 24 weeks Fiona suffered a serious bleed and doctors feared their babies might not survive.

Just five weeks later the same thing happened again and medics told the anxious couple they had no choice but to deliver the babies there and then by Caesarean section.

The couple welcomed son Hamish and daughter Blair at Wishaw Maternity Unit on October 21, weighing in at 3lbs 10oz and 3lbs and 4oz respectively.

The babies were immediately incubated and transferred from Wishaw to Victoria Hospital in Kirkcaldy, more than 50 miles away.

Fiona was still receiving medical treatment from the C-section and was not able to be transferred for another two days, meaning it was 48 hours before the couple were able to see their babies again.

Gordon says: "That was really very difficult for us, especially after having been through all the IVF and everything. We were just so desperate to meet them properly and hold them and really start bonding with them."

The couple then relocated to Fife and are currently 'living' at the hospital as they keep a watchful eye over their precious babies who are receiving round-the-clock care.

Gordon added: "They are 20 days old and now and getting stronger every day. The consultants say their tests and scans look like they should not have any long lasting problems or issues, which is a relief. At the moment Blair is still on oxygen as she is struggling a bit with her breathing but she is getting there.

"We are just so grateful to all the incredible care they are getting and of course Fiona and I too. I'm so grateful I am able to continue working from their bedside as well. That has been a weight off our minds.

"These last couple of years have seen many of us adapt to working from home and that's all I'm doing, but just now my home just happens to be the NHS."

Don't miss the latest news from around Scotland and beyond - Sign up to our daily newsletter here.