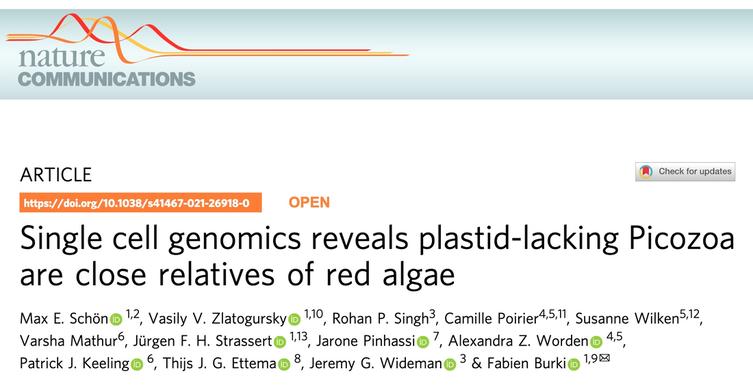 The origin of plastids by endosymbiosis between a eukaryotic host and cyanobacteria was a fundamental transition in eukaryotic evolution, giving rise to the first photosynthetic eukaryotes. These ancient primary plastids, estimated to have originated >1.8 billion years ago1, are found in Rhodophyta (red algae), Chloroplastida (green algae, including land plants), and Glaucophyta (glaucophytes)—together forming the eukaryotic supergroup Archaeplastida2. Unravelling the sequence of events leading to the establishment of the cyanobacterial endosymbiont in Archaeplastida is complicated by antiquity, and by the current lack of modern descendants of early-diverging relatives of the main archaeplastidan groups in culture collections or sequence databases. Indeed, the only other known example of primary endosymbiosis are the chromatophores in one unrelated genus of amoeba (Paulinella), which originated about a billion years later3,4. Recently, two newly described phyla (Prasinodermophyta and Rhodelphidia) were found to branch as sister to green and red algae, respectively5,6. Most transformative was the discovery that rhodelphids are obligate phagotrophs that maintain cryptic non-photosynthetic plastids, implying that the ancestor of red algae was likely mixotrophic, a finding that greatly alters our perspectives on early archaeplastid evolution5.

While there is substantial evidence that Archaeplastida is a group descended from a photosynthetic ancestor, non-photosynthetic and plastid-lacking lineages have been found to branch near the base or even within archaeplastids in phylogenomic trees. For example, Cryptista (which includes plastid-lacking and secondary plastid-containing species) have been inferred to be sister to either green algae and glaucophytes7, or red algae5,8, although other phylogenomic analyses have recovered the monophyly of Archaeplastida to the exclusion of the cryptists5,9,10. Another non-photosynthetic group that recently showed affinities to red algae based on phylogenomics is Picozoa5,9,10. But as for cryptists, the position of Picozoa has lacked consistent support, mostly because there is no member of Picozoa available in continuous culture, and genomic data are currently restricted to a few, incomplete, single amplified genomes (SAGs)11. Thus, the origin of Picozoa remains unclear. 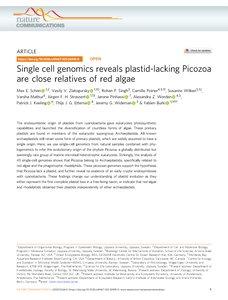 Picozoa (previously known as picobiliphytes) were first described in 2007 in marine environmental clone libraries of the 18S ribosomal RNA (rRNA) gene and observed by epifluorescence microscopy in temperate waters12. Based on orange autofluorescence reminiscent of the photosynthetic pigment phycobiliprotein and emanating from an organelle-like structure, picozoans were initially described as likely containing a plastid. Orange fluorescence was also observed in association with these uncultured cells in subtropical waters13. However, the hypothesis that the cells were photosynthetic was challenged by the characterisation of SAG data from three picozoan cells isolated by fluorescence-activated cell sorting (FACS)11. The analysis of these SAGs revealed neither plastid DNA nor nuclear-encoded plastid-targeted proteins, but the scope of these conclusions is limited due to the small number of analysed cells and the highly fragmented and incomplete obtained data11. Most interestingly, a transient culture was later established, enabling the formal description of the first (and so far only) picozoan species—Picomonas judraskeda—as well as ultrastructural observations with electron microscopy14. These observations revealed an unusual structural feature in two body parts, a feeding strategy by endocytosis of nano-sized colloid particles, and confirmed the absence of plastids14. Only the 18S rRNA gene sequence of P. judraskeda is available as the transient culture was lost before genomic data could be generated.

Here, we present an analysis of genomic data from 43 picozoan single-cell genomes sorted with FACS from the Pacific Ocean off the Californian coast and from the Baltic Sea. Using a gene and taxon-rich phylogenomic dataset, these data allowed us to robustly infer Picozoa as a lineage of archaeplastids, branching with red algae and rhodelphids. With this expanded genomic dataset, we confirm Picozoa as the first archaeplastid lineage lacking a plastid. We discuss the important implications that these results have on our understanding of the origin of plastids.