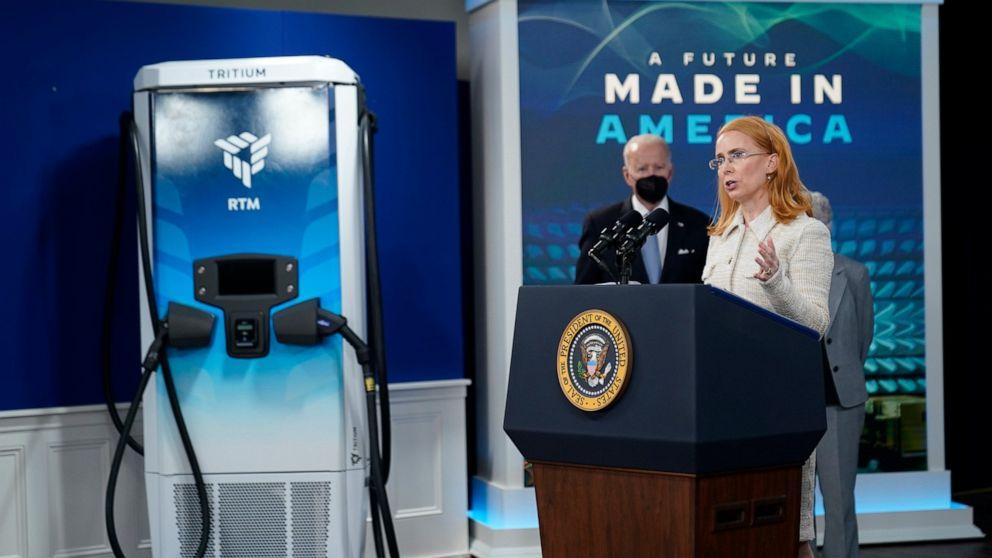 States are being given the go-ahead to build a nationwide network of electric vehicle charging stations that would place new or upgraded stations every 50 miles along interstate highways, part of the Biden administration’s plan to spur widespread adoption of the zero-emission cars.

The administration on Thursday announced the availability of $5 billion in federal funds to states over five years under President Biden’s infrastructure law, sketching out a vision of seamless climate-friendly car travel from coast to coast.

Under new requirements issued by the Transportation Department, states must submit plans to the federal government and can begin construction by this fall if they focus first on highway routes that can allow people to take their electric vehicles long distances, rather than neighborhoods and shopping centers. Each station would need to have at least four fast-charger ports, which enable drivers to fully recharge their vehicles in about an hour.

A joint office between the Transportation and Energy departments will help provide guidance to states on how to build out the network, with attention as well to serving rural and disadvantaged communities. If states don’t fully meet requirements, they risk delays in getting approval from the Federal Highway Administration or not getting federal money at all.

“A century ago, America ushered in the modern automotive era; now America must lead the electric vehicle revolution,” said Transportation Secretary Pete Buttigieg, who will have final signoff over most aspects of the funding. “The president’s Bipartisan Infrastructure Law will help us win the EV race by working with states, labor, and the private sector to deploy a historic nationwide charging network that will make EV charging accessible for more Americans.”

The law also provides an additional $2.5 billion for local grants, planned for later this year, to fill remaining gaps in the charging network in rural areas and in disadvantaged communities, where residents are currently less likely to own the higher-priced electric vehicles.

California’s electric car revolution, designed to save the planet, also unleashes a toll on it

In the name of climate action, California pushed the world toward electric cars. But building enough of them is creating its own environmental crises.

Biden made a pledge during the presidential campaign to build a first-ever network of 500,000 charging stations. He has also set a goal of 50% electric vehicle sales by 2030, part of a broader effort to build a zero-emissions U.S. economy by 2050.

Electric vehicles amounted to less than 3% of U.S. new auto sales last year, but forecasters expect big increases in the next decade. Consumers bought about 400,000 fully electric vehicles in 2021. According to a Consumer Reports survey, anxiety about limited range and the availability of charging stations were among the top concerns consumers had about owning an EV.

“We are modernizing America’s national highway system for drivers in cities large and small, towns and rural communities, to take advantage of the benefits of driving electric,” Energy Secretary Jennifer Granholm said. Alluding to surging gasoline prices, she said the aim is to build “the necessary infrastructure for drivers across America to save money and go the distance.”

There are more than 50,000 charging station locations in the U.S., with more than 100,000 outlets. Senior administration officials now describe money in the infrastructure law as a first step in meeting the half-million goal by 2030, after Biden’s proposed $15 billion for charging stations was cut in half. They envision the new construction could spur additional big investments from the private sector.

Getting low-income communities to transition to electric cars is a key climate challenge for California and the nation. A rural city is paving the way.

Currently, electric vehicle owners charge their vehicles at home 80% of the time, making the need for EV charging stations at colleges, apartment building parking lots or even public streets less urgent. But that is likely to change as more people who don’t have a garage to house a charging station buy EVs.

Under the Transportation Department plan, states would be eligible to build out EV stations in neighborhoods and cities once the Federal Highway Administration and Buttigieg certify they have done their part to fulfill commitments to the highway EV charging network, known as alternative fuel corridors.

Direct-current fast chargers, which can charge a car up to 80% of its battery capacity in 20 to 45 minutes,cost $40,000 to $100,000, limiting the number that can be built, but they enable drivers to quickly get back on the road.

Chargers that run on 240-volt electricity similar to what powers a clothes dryer are far cheaper, around $2,000. They take around eight hours to fully recharge a car and are expected to be a next step in construction as soon as next year in places where people park their carsfor long periods of time.