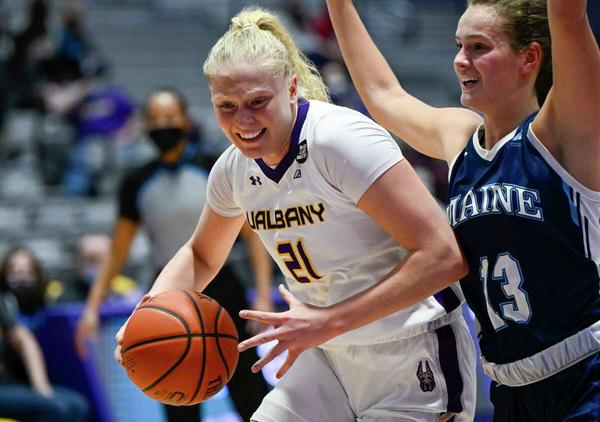 HANOVER — In a back-and-forth contest that saw 12 lead changes, the Dartmouth College women’s basketball team picked up its first conference win of the season, a 58-54 victory over Brown on Saturday at Leede Arena.

All 11 members of the Big Green (2-18, 1-7 Ivy League) who saw action scored. Freshman forward Doreen Ariik scored a team-high 11, including a couple clutch baskets down the stretch in the fourth quarter. Senior guard Jimena Abejon added 10, playing 31 minutes despite starting on the bench.

“This first Ivy League win was special for many reasons,” first-year head coach Adrienne Shibles said. “I am most proud of the way that each and every player contributed to the effort. The squad has improved so much over the course of the season, and this outcome was evidence of their hard work, faith and togetherness.”

The win followed Friday evening’s 48-33 loss to Yale in which senior guard Katie Douglas, with 10 points, was the only Dartmouth player in double figures.

The Bears will get a chance to exact revenge on the Big Green when they host Dartmouth in Providence on Tuesday night.

In a season full of close losses for the Big Green, Dartmouth suffered two more this weekend, falling 72-69 at Yale on Friday and 62-60 at Brown on Saturday. The Big Green (5-14, 2-6 Ivy League) have now lost four conference games by four points or fewer.

Against the Bulldogs, Dartmouth trailed by as many as 12 in the second half and nearly completed an impressive comeback. Graduate guard Brendan Barry and freshman guard Ryan Cornish each missed a potential game-tying 3-pointer in the final seconds. Barry had 25 points, junior forward Dame Adelekun had 17 to go along with 15 rebounds and senior guard Taurus Samuels had 12.

It was a similar story in Providence the following day. The Bears led by 14 with 15 minutes left before the Big Green began chipping away. Dartmouth actually led by six late after a pair of 3-pointers by Barry and maintained that lead until the final minute, but Brown’s free throw shooting made the difference. Barry’s 21 points led all scorers.

The Big Green head to Princeton on Saturday.

HANOVER — The Big Green were in good shape for most of Sunday afternoon’s contest against the Bears, but Brown scored twice less than a minute apart in the third period to salvage a draw.

Junior CC Bowlby got Dartmouth (8-15-1, 2-14-1 ECAC Hockey) on the board with a goal seven minutes into the game, only to see the Bears equalize 19 seconds later. The Big Green retook the lead on sophomore Jenna Donohue’s goal in the second, and Bowlby’s second goal early in the third gave them some insurance. Junior goaltender Hannah Humphreys made 28 saves.

Dartmouth hosts Quinnipiac on Friday before a home-and-home with Princeton on Saturday and Sunday.

Freshman Ian Pierce scored the Big Green’s lone goal against the Crimson on a second-period power play, cutting the Dartmouth deficit to one, but Harvard’s empty-netter sealed it late. Sophomore goaltender Clay Stevenson made 31 saves.

The next day, against the River Hawks, freshman Braiden Dorfman gave the Big Green an early lead, but it was mostly downhill from there. Freshman Sean Chisholm and junior Tanner Palocsik also scored for Dartmouth.

Dartmouth hosts Brown on Friday and Yale on Saturday.

In their 5-2 win over the Eagles, the Big Green swept the doubles matches and got singles victories from freshman Chloe Yoo at No. 6, freshman Elizabeth Fahrmeier at No. 5, junior Ashley Hess at No. 3 and sophomore Katie Weber at No. 4.

Fahreimer gave Dartmouth its only point against the 49ers.

The Big Green head to the ECAC Indoor Championships in Ithaca, N.Y. this weekend, hosted by Cornell.

UNIVERSITY PARK, Pa. — The Big Green routed the Vikings, 6-1, on Saturday, then fell 4-1 to the Nittany Lions on Sunday.

The Big Green won the doubles point against Penn State but were swept in the singles.

After a weekend off, Dartmouth heads to Ithaca, N.Y. from Feb. 18-20 for the ECAC Indoor Championships.

HANOVER — The No. 12 Big Green (4-8) eased past the No. 15 Cardinal, including straight-set wins from seniors Emma MacTaggart, Darden Gildea and Caroline Mollenkopf.

Dartmouth is next in action Wednesday evening at home against 19th-ranked Middlebury. The Big Green conclude Ivy League play Saturday against Brown.

On the men's side, freshman Isaac Weigel won all three of his events, taking first place in the 100- and 200-yard freestyle and the 100-yard individual medley. Senior Joe Moll led the field in the 500 free.

The Big Green's brightest star for the women was senior Mia Leko, who won the 200 free and the 100-yard butterfly.

Freshman Mary Howley was first in the 50 fly and senior Susannah Laster won the 100 IM.

The women will compete at the Ivy League Championships at Harvard from Feb. 16-19 and the men's championshps are the following week at Princeton.